Golf’s oldest championship returns to Muirfield for the 142nd staging of The Open Championship.

Muirfield last hosted the British Open in 2002, where four players battled for the claret jug after Thomas Levet, Stuart Appleby, Steve Elkington and Ernie Els all finished at 6-under par. 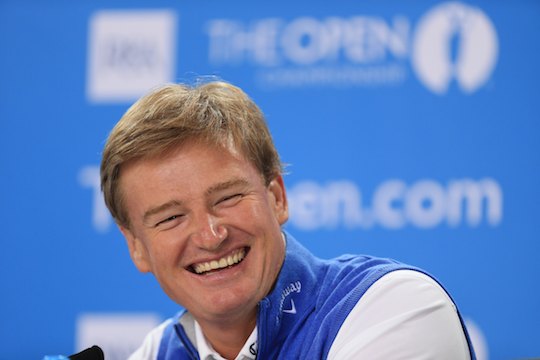 Defending champion, Ernie Els, speaking to the media ahead of the 142th Open Championship (Credit:Fran Caffrey/www.golffile.ie)

The Aussies were eliminated after four holes, which left it to Levet and Els, with the South African winning.

Els returns to Muirfield with a double title defence up for grabs. He was last to win at that course, and he won last year’s title thanks to some great play by him that saw him overtake Scott on the final day after the Aussie blew a three shot lead with four holes to play.

Els is carrying some form into this championship with three top-10s in his last four starts, including a win at the BMW International Open, but he missed the cut by two at last week’s Scottish Open.

One of the most difficult courses on the rotation, Muirfield demands accuracy rather than length and as with all Open championships the player who putts and scrambles the best will be right up there on Sunday.

Both Tiger Woods and Rory McIlroy, the world’s number one & two respectively, are struggling, with Woods apparently injured with an elbow injury he sustained at Merion and he hasn’t played since.

McIlroy has missed the cut in two of his last four starts.

In the last six months the 24-year-old, whose high-profile relationship with tennis player Caroline Wozniacki has also come under scrutiny, is also in the process of leaving his management company.

Many commentators have been critical of McIlroy saying he is being distracted by off-course activities and “should concentrate solely on golf”.

McIlroy is paired with Phil Mickelson, who won the Scottish Open on Sunday, as well as Japan’s Hideki Matsuyama for the opening rounds starting Thursday.

Tiger Woods is with McIlroy’s countryman Graeme McDowell and the 2010 champion Louis Oosthuizen.

Woods has won four times this year and, injury cloud aside, should never be discounted in bigger events.

Justin Rose at number three is in stellar form entering the season’s third major as he seeks to become a multiple major winner. In reality, it would be a shock if Rose were to prevail at Muirfield this week, but the Brit certainly has the game to do it.

Adam Scott arrived at Muirfield on Monday looking relaxed and with the shackles of last year’s events thrown away following his Masters win in April.

With five top-10′s from ten starts in majors, the Masters champion certainly has the game and experience to win this week.