Chappell returns from back injury with round of 59

Whatever was wrong with Kevin Chappell’s back certainly looks as if it has been fixed.

The American professional had his first start back on the US Tour, 10 months after back surgery and shot the best round of his life. 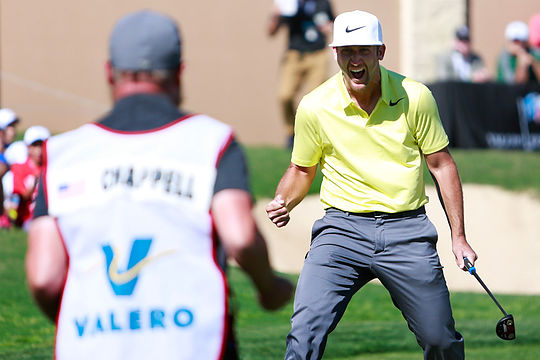 Chappell became just the 10th player in US Tour history to shoot that magical number of 59 during the Military Tribute at the Greenbrier won by Chile’s Joaquin Niemann on Sunday.

And while Chappell’s other three rounds were in the 70s, placing him well back in the field, it was a round he’ll be telling his grandchildren about.

His 11-under-par second round (after a first-round 71) included an amazing nine consecutive birdies.

“Ten months ago, I was laying on my couch and couldn’t get up,” said Chappell.

“I just couldn’t feel luckier to be here right now.”

The world No. 226 underwent surgery in November 2018 and he only played his first nine holes in May.

“To go out and have my first start back on the PGA Tour to shoot 59 and get myself in contention, well, I just couldn’t be more proud of myself right now,” said Chappell.

“But to be able to compete at the level I knew I could do it at, I questioned that.”

“But I think this certainly validates that my game is there. I still possess that ability.”

The 33-year-old actually missed another birdie attempt on the 18th that would have put him in a tie with Jim Furyk’s PGA Tour record of 58.