China’s Jin Cheng was crowned champion of the 2015 Asia-Pacific Amateur Championship after Sunday’s fourth round was cancelled leaving Aussies Ryan Ruffels and Cameron Davis agonisingly short of booking a spot at next year’s Masters.

A lengthy suspension in play, due to high winds and rainfall from a nearby typhoon, eliminated the possibility of play being completed before darkness. 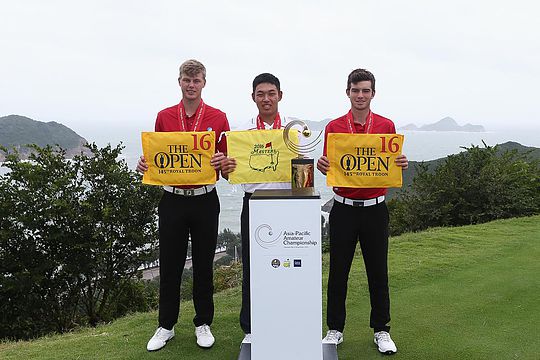 Ruffels, the World No. 8 and highest-ranked player in the field, and Davis were clearly disappointed not to have had the opportunity to play on Sunday only to be pipped at the post despite extensive preparations being undertaken but the Australian team and coaches going into these championships.

Cheng, the Chinese no.1 ranked amateur, managed to retain his place at the top of the leaderboard at the end of round three thanks to a superbly judged chip at Clearwater Bay Golf and Country Club’s par-5 closing hole, from which he went on to secure a decisive birdie and take a one shot lead over Ruffels and Davis, who both fired third round 67′s to Cheng’s 69.

The win means Cheng becomes the second player from China to lift the AAC trophy following the triumph of Guan Tianlang in 2012.

“While weather regrettably shortened the event, we have identified a very worthy and talented champion in Jin Cheng,” said Billy Payne, Chairman of Augusta National Golf Club and the Masters Tournament.

“This is a moment of celebration. He showed his tremendous skill during the championship and we look forward to welcoming him to Augusta next April. We know Cheng will proudly represent the Asia-Pacific Amateur Championship and everyone who loves the game from this region of the world.”