China’s Li Haotong achieved his third career European tour win and first since 2018 at the BMW International Open on Sunday in a thrilling play-off against Thomas Pieters after he nailed a 20 metre putt on the first sudden death hole.

Haotong had led the tournament since a course record-equalling round of 10-under 62 on the opening day yet could not break away over the weekend seeing the pair locked in at 22-under-par after regulation play. 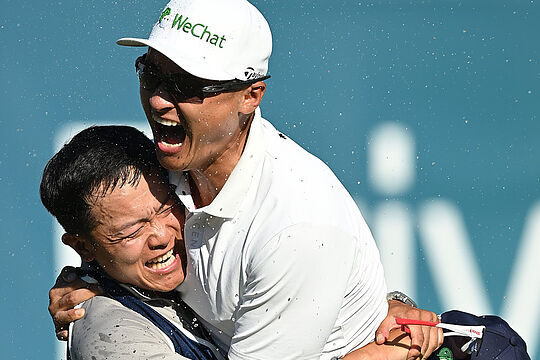 After four bogeys and just one birdie between the 6th and 15th holes, Haotong needed birdies at the 16th and 17th to maintain a one-shot advantage over Pieters down the last. When Pieters birdied the 18th and Haotong’s three-metre putt to win lipped out, the pair headed back down the par 5 18th.

In the play-off on the par five 18th hole, Pieters, who carded a five-under-par final round 67, found a green-side bunker with his second shot, while Haotong’s approach went over the green. After Pieters had chipped to ten feet, Haotong thinned his third shot, leaving the prospect of holing a 40-footer just to stay in the contest.

Haotong nailed his birdie putt and with that the victory.

“I don’t have the words to describe right now,” said Haotong.

“Ten months ago I just literally decided to quit golf, and somehow where I am now, it’s just hard to describe. I had no idea I could win this play-off. Luckily things happened for me again.”

Haotong also secured a place at The 150th Open at St Andrews next month after moving up to 17th on the DP World Tour Rankings, securing one of five spots for those not otherwise exempt inside the top 20 on the season-long standings after the BMW International Open.

Wade Ormsby finished last of the players to make the cut and was the best of the Australians in a share of 67th position.

Zach Murray and the once touted star of Aussie golf by many in our local media, Elvis Smylie, missed the weekend with Smylie firing rounds of 74-71. Smylie currently sits 772nd in the world rankings and was playing in his first event since the Western Australian Open.