China’s Yuxin Lin has overtaken Australia’s Min Woo Lee to take the third round lead at the Asia-Pacific Amateur Championship being played at Royal Wellington. 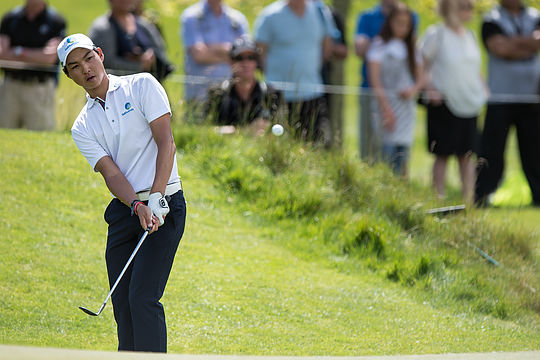 Lee showed plenty of competitive spirit in firing an even par 71 on a day where the 19-year-old carded a mixture of an eagle, birdies, pars and bogeys. Lee shares second position with China’s Andy Zhang.

“I was staying patient the whole day,” said Lee. “Nothing was really going that well. So I think in this situation, you have to stay patient. Like having the lead is pretty tough. Just when things aren’t going well, just to stay patient is the key.”

Similar to yesterday, Lee’s card reflected a mixture of bogeys and birdies. A solid eagle on the par 5, 499 metre 5th got him to 1-under for the day after a bogey on the 2nd. By the turn Lee was even par and had blown out to 1-over after an error on the 12th resulted in a bogey. Lee’s mid-irons were causing issues and finding the greens is all-important around Royal Wellington.

“I had a bit of a left shot with my irons,” said Lee. “I didn’t really miss many right. So just got to work on that.”

“I think some shots, we aren’t really sure on what to hit. We were committed but there was always a 2 iron or a 3 wood we were trying straight hit. But I didn’t hit many fairways at all, so just have to find my swing and have a swing thought for tomorrow.”

First round leader Shae Wools-Coob refuses to give in and has an obvious affection for Royal Wellington’s par 5, 497 metre 18th, again nailing an eagle today to see the Queenslander in outright 4th position at 5-under-par.

Wools-Cobb has fired rounds of 63-74-71 and is just three strokes behind Lin. Dylan Perry has played consistent golf with rounds of 71-69-71 to be at 2-under and in a share of 9th position and the third Aussie inside the top-10.

As for the remaining Australians the third round proved punishing.

Harrison Endycott fired at 3-over-par 74 to be at 2-over and in a share of 19th position. Travis Smyth fired a 4-over-par 75 to slip down the leaderboard to be at 3-over following earlier rounds of 70-71.

Charlie Dann is at 7-over-par and in a share of 46th position.