“Pissed off” is how Rory McIlroy bluntly described blowing a two-shot lead with a a handful of holes to play and finish runner-up in the Dubai Desert Classic.

McIlroy had moved to 22-under par through 10 holes after having overtaken overnight leader, Haotong Li.

But McIlroy then opened the door on his 22-year old Chinese rival, Haong Li, who burst onto the world stage big-time in shooting a final round 63 at last year’s Open Championship at Royal Birkdale.

And Li did not have to be asked twice in seizing the inititative to birdie four of his closing six holes in a round of 69 and silence McIlroy’s first taste of victory since October 2016. 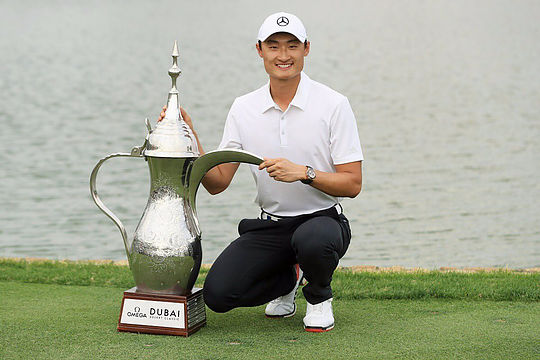 Li not only grabbed the biggest win of his career but set a new Emirates tournament record with his 23-under par victory tally.

McIlroy had been delighted to finish third a week earlier to Tommy Fleetwod but then you could sympathise with his reaction in letting slip what would have been a third Desert crown.

“I thought I was in the driver’s seat but then I got a bogey out of nowhere on 11, it was just a bad nine iron there.”

“And then the three putt on 13, those were the two key holes of the tournament, really, even though there was a bad tee shot on 16.”

“From being two ahead, standing on the 11th tee, to being, you know, level going into 16, I just, yeah, I just, I don’t know, it was a couple of bad shots, a couple of poor decisions, a couple of mental errors, a few tentative putts.”

“If someone had told me at the start of the year you’d finish third and second your first two events, I’d say, yeah, I’d take that. But being in the positions I’ve been in and having two close calls it’s a little difficult.”

But being in the positions I’ve been in and having two close calls the first couple of weeks of the year, it’s a little difficult. I think I wouldn’t — the competitor in me is very disappointed right now.”

“I wanted to win. I always want to win, and I just didn’t do enough when I needed to.”

McIlroy ended the Tour’s ‘Desert Swing’ a massive 40-under par for his eight rounds and averaging 67 a round.

But the result is also McIlroy’s 16th ‘bridesmaid’ role on the European Tour alone.

He was headed back to his new Florida abode taking a week off before teaming with his father, Gerry in next week’s AT&T Pebble Beach Pro-Am and the first of six PGA Tour events that will lead to Augusta National.

Li collected his sixth win as a pro and moves into the world’s top-50 that will also guarantee him a Masters invitation.

“Over the last four holes I hit some of the best shots of my life.”

Western Australia’s Jason Scrivener fired a final round 6-under 66 to finish the week in a share of 6th place.

Former Asian Tour stalwart Sam Brazel continued his good form sharing 22nd place on 14-under with Andrew Dodt another stroke back in a tie for 29th.

Scott Hend and Brett Rumford rounded out the Aussie attack who made it through to the weekend with both players sharing 37th place.

Rumford, who was eyeing off one of his best finishes on the European Tour since his victory at last year’s ISPS HANDA World Super 6 Perth, slipped away on the final day with a 1-over 73.