It’s been seven years in the making, eight if you count a year on the secondary Symetra Tour, but Chella Choi has finally broken through to win her first LPGA title at the Marathon Classic on Sunday.

The 24-year Korean defeated compatriot Ha Na Jang with a birdie on the first hole of a playoff at Highland Meadows in Ohio, after the pair had tied at 14-under par 270 for the four rounds. 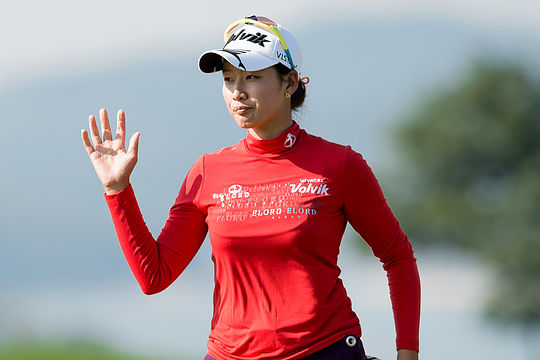 “You know, first time win is hard,” Choi said. “I cannot believe it.”

“Hopefully, this is a turning point for me. It’s been a long time, seven years. So, I was really, really excited and happy.”

It’s well known in women’s golf circles that her father Ji Leon Choi, a former policeman, made his daughter a promise that he would caddie for her until she won on Tour.

There have been many close finishes over the years, including the 2014 Women’s Australian Open at Victoria Golf Club when Choi shot 62 on Saturday but finished a stroke shy of Karrie Webb after a two-over 74 in the final round.

Now the pair have to face up to whether the promise was in fact, idle banter, or if indeed he will hang up the bag.

“My father wants to retire because we promise, but I don’t know,” Choi said. “We will talk later.”

“I work with my father eight years and somebody say like that’s why I don’t win, just for my caddie. So, I’m so excited for my father.”

LPGA rookie Jang lead the tournament throughout the week until the final day and bogeyed the first hole after hitting her approach shot long into high rough. She was too emotional to speak to the media following the playoff.

For her long awaited victory, Choi earned $225,000 and will jump from 40th to 25th in the Rolex Rankings. Defending champion Lydia Ko shot a final round 67 to tie for third with China’s Shanshan Feng, who also shot 67 on Sunday, at 13-under.

“I’m happy that I could give it a run for it to defend the title,” Ko said. “Seeing how average my first day score was, to be top five or whatever, I think it’s a good finish for the week.”

Australia’s Minjee Lee tied for 22nd place at 6-under, ahead of Sarah Kemp (T39th) and Sarah Jane Smith (T55th), as the LPGA moves on to Grand Rapid, Michigan for this week’s Meijer LPGA Classic.