Doey Choi has finished the best of the Australians at the US Girl’s Junior Championship making it to the quarter finals before going down to the World Number 19, Lucy Li at Poppy Hills Golf Course, Pebble Beach in California.

Choi was the 41st qualifier into the elimination match play segment of the championship and fought tenaciously against the number 1 seed, yet Li was too strong on the day winning their encounter, 5&4. 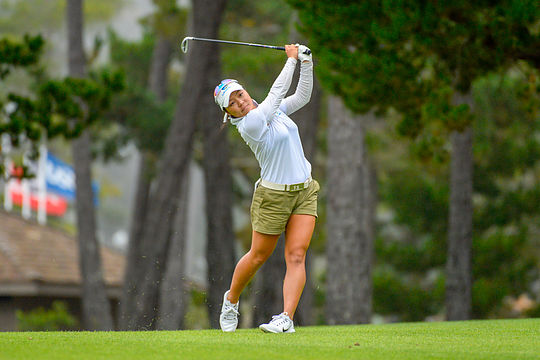 Fellow Sydneysider Stephanie Kyriacou also had a solid tournament qualifying as the 28th seed and progressed to the round of 16 before narrowly losing to American Alex Pano, 1-down.

Maddison Hinson-Tolchard was the third Aussie to qualify yet fell to Canada’s Celeste Dao 4&3 in the round of 64.

The final was an all-American affair with Yealimi Noh, 16, of Concord, California, and Alexa Pano, 13, of Lake Worth, Florida doing battle with Noh securing a 4&3 victory.

The win will give her a start at the 2019 US Women’s Open at the Country Club of Charleston, provided she is still an amateur.

In the US Junior Amateur at Baltusrol Golf Club, Springfield in New York two Australians qualified for the match play segment with Karl Vilips the number 3 seed and Jediah Morgan the 48th seed.

Earlier Vilips had finished in a share of second position in the two round stroke qualification at 6-under-par, two strokes behind medallist American Kelly Chinn.

Morgan qualified with a 5-over-par total to make the championship to see two of three Australians through with Terry Yoon missing finishing with a 13-over-par total.

Morgan would bow out narrowly in the round of 64 to Jolo Timothy Magcalayo of the Philippines, 1-down, with Villps progressing to the round of 32 before losing to Thomas Ponder, 3&1.

The final saw American Michael Thorbjornsen accounting for fellow countryman Akshay Bhatia with a 1-up victory.

Thorbjornsen, who trailed Bhatia for most of their match before pulling ahead for the first and only time on the 32nd hole, struck a 23 metre birdie putt on the 36th hole to inside of a metre, and Bhatia conceded the hole and the championship.

With the usual match-play concessions, both Bhatia and Thorbjornsen recorded 36-hole scores of 2-over 144. Bhatia shot rounds of 72-72, while Thorbjornsen shot 75-69.