The Australian took little time in overturning Andrew Oldcorn’s overnight advantage, catching the Scot by the sixth hole after Oldcorn started with three bogeys in his opening five holes. 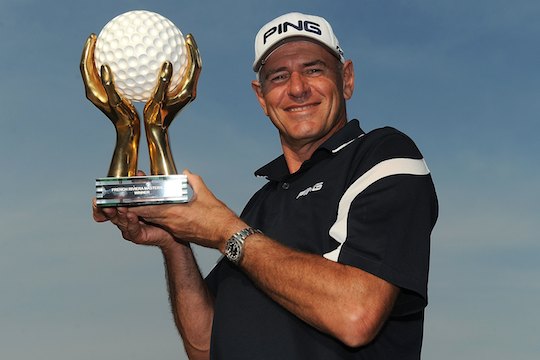 Fowler began with three pars and a birdie on the fourth to tie the lead and with consecutive birdies over the next two holes, and a double bogey from Oldcorn at the 8th, Fowler seized control of the tournament and further extended his lead with birdies at the 10th and 11th.

He then posted seven consecutive pars on the back nine to post a six-under 66 and a winning total of 11 under par 205.

“Wins aren’t easy to come by so it is always special to get one,” said the 54 year old, “I’ve worked hard for this so it feels good.”

“It is hard to win because there are so many good players on this Tour, like Andrew. I thought he was going to win today as it is hard to pull back a four stroke lead, so I just tried to play my own game.”

Fowler jumped to 2nd on the money list with the first prize of €60,000 and is now just €11,929 behind Englishman Paul Wesselingh on the Order of Merit with four events remaining.

For Oldcorn, it was further frustration at the hands of Fowler, having finished runner up to him for all three of the Australian’s Senior Tour wins. He has now been second on seven occasions on the Senior Tour.

“I’m sick of the sight of Peter,” joked Oldcorn. “That’s all three times now that he has won and I’ve finished second. Peter played well and he never missed a putt all day, so all credit to him.”

Japan’s Katsuyoshi Tomori fired a seven under par 65 to finish fourth on seven-under par, while Ian Woosnam closed with a 67 to finish in a share of fifth position with England’s Philip Golding (70) and New Zealand’s Greg Turner (69) on six-under par.