The Australian came into the final day with a four-shot lead and eventually won by three, but he did not have it all his own way during the final round at Close House in Newcastle-upon-Tyne. 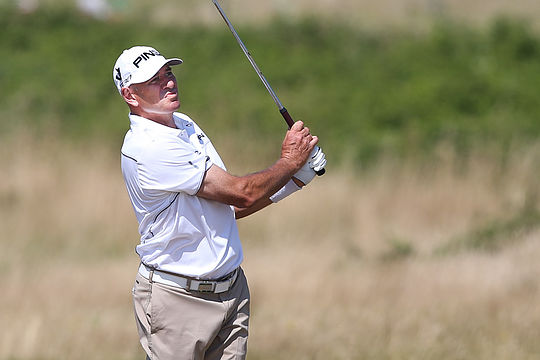 But Fowler refused to buckle and refocused his efforts on the back nine, firing three birdies to finish at 12-under par to claim his fifth European Senior Tour win and a €57,217 (AU$83,000) winner’s cheque.

Manson finished second, three shots back, with Carl Mason in third place at 8-under par.

“Two wins in a row is something that doesn’t happen very often,” said Fowler. “There’s a lot of years of hard work, almost 15 years, to get to this stage, so it’s been worth it.”

“I’m playing really good golf and whether you win or not it’s a bonus, but playing good golf is what I strive to do. My putting in particular has been the best it has been for a long, long time, so I’m chuffed with that. You can’t win tournaments without your putting.”

Manson’s second place finish was the best of his European Senior Tour career.

“Peter (Fowler) said to me ‘well played you had me sweating out there’ and I gave him a bit of a run for his money. I had chances and got some good putts in today,” the Austrian said.

“It’s my best ever finish and I’m delighted. There was a little blemish on the last, but hey, I did so much good stuff this week.”