World No.77 Steph Kyriacou has signed off on her Ladies European Tour season in style after finishing in a share of 5th at the Andalucia Costa del Sol Open de Espana.

The Sydney-sider, who turned 21 last Monday, has enjoyed a breakthrough year in Europe with her first victory on European soil coming at the Big Green Egg Open along with another nine top-10’s.

Thanks to her top-five finish in the Race to Costa del Sol, there will be no end of year celebrations just yet for Kyriacou, who is now on her way to LPGA Q-School, which begins this week at the Robert Trent Jones Golf Trail in Alabama. 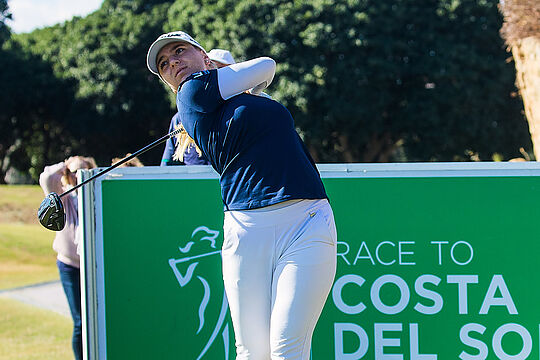 “I’m happy I played well and got third, also happy I have the opportunity to go to the States and try to get on the LPGA Tour,” Kyriacou told AAP.

“I think my putting has been key. I have been working on that and tried to stay on top of it and my wedge game as well.”

Spain’s Carlota Ciganda took the honours on Sunday with a four-shot victory on 15-under. It was the fifth win for the Solheim Cup star.

Whitney Hillier rounded out the Aussie field sharing 23rd place to finish 45th on the Race to Costa del Sol thanks to a handful of solid late season results.