Chun shot a three-over 75 for the second consecutive day at Congressional, but that was enough to win her third major title by a stroke over Thompson and Lee, who fell agonisingly short in her bid for back-to-back majors. 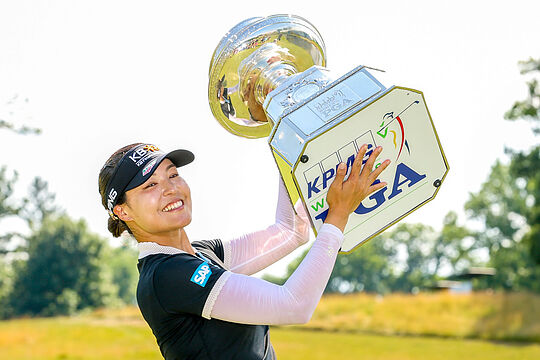 Lee, who trailed by six at the start of the day, just missed an eagle putt on No. 16 that could have tied her for the lead, but a bogey on the 17th damaged her chances of the major title.

“I never really felt too out of it after turning at even par after nine,” said Lee, winner of the recent US Women’s Open and who now moves into the World No.2 position. “I thought if I can make one or two birdies coming in, then I might have a chance.”

Chun had a three-stroke lead heading into the final day and was able to hold on to collect her third major. She takes home US$1.35 million after the prize money for the event was doubled.

“I want to tell truth. I think I couldn’t control all my pressure. That’s why I had four bogeys. Then, at the same time, you know, the course is never easy here,” said Chun. “Sometimes my golf is not perfect so that’s what happened on the front nine.”

It was Chun’s first victory anywhere in the world since 2018 and only her second in the United States, with her first at the 2015 US Open. She won her second major the following year at the Evian Championship in France.

Hannah Green finished in a share of fifth at 1-under and had her chances only to close with a disappointing 75. Fellow Australian Steph Kyriacou tied for 10th at level par after four consecutive rounds of 72.

Sarah Kemp shared 40th position to be the last of the Aussies to make the weekend cut.