Stewart Cink has won his seventh PGA Tour title at the season-opening Safeway Open on Sunday closing with a 7-under 65 for a two shot victory over rookie Harry Higgs.

The 47-year-old last won a PGA Tour-sanctioned event when he ended Tom Watson’s 2009 Open Championship fairytale in a four-hole playoff.

“It’s been an awesome time. My son Reagan caddied for me, Lisa [his wife] was here. This is a really special place.”

“I’ve played some good golf over the years. It’s been a while since I’ve played well for four rounds…but I really played great over the weekend. I was clear-headed and calm and that’s an area where I have really struggled,” said Cink. 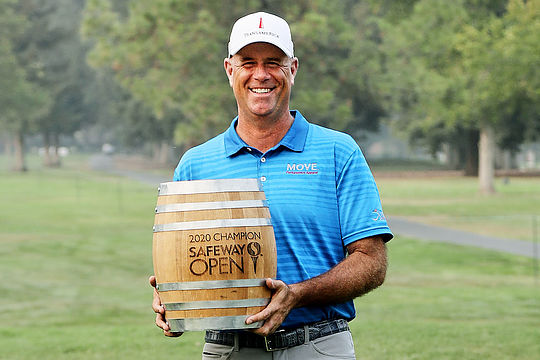 The win sees the 47-year-old now fully exempt through this season and two more after it meaning he will get through to his 50th birthday when he becomes eligible for the Champions Tour.

He will also get a start in the 2021 Players Championship and the 2021 Masters along with the 2021 Sentry Tournament of Champions in Maui.

For the 28-year-old Higgs, it was the second runner-up in his short career after finishing behind Brendon Todd at the 2020 Bermuda Championship last November.

What’s In The Bag: Stewart Cink

Australia’s Cameron Percy entered the final round sharing the lead with Brian Stuard and James Hahn, however, the nerves seemed to get the better of him in his quest for his first PGA Tour win and the Victorian had to settle for a share of 23rd place following his 2-over 74.

Cameron Davis began his new season in style firing a final round 5-under 67 for a share of 36th. Rhein Gibson failed to make a mark on the weekend with back-to-back rounds of 76 seeing him close the week in last place.