Ireland’s Darren Clarke made it back-to-back Irish-born over-50 Major champions in denying Padraig Harrington victory in the Senior Open Championship by Rolex at Gleneagles.

Following lengthy rain delays during the final round, Clarke birdied the 72nd hole to win by a shot following a 1-under 69 and a 10-under tally on the Kings Course. 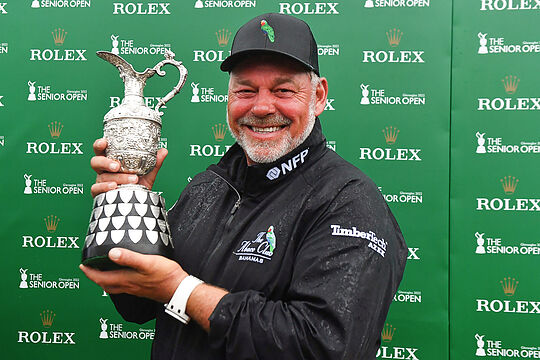 The win came just a month after Harrington brilliantly birdied six of his closing nine holes at Gleneagles to capture the US Senior Open last month, and while Harrington was naturally disappointed not to make it two senior majors in succession, he was delighted for his 53-year-old Irish compatriot.

Previous winners of the Open/Senior victory double include Gary Player, Bob Charles and Tom Watson, who captured a third Senior Open in 2007.

Clarke had been in contention for a Senior Open victory a year ago ahead of finishing third to former Irish Open winner Stephen Dodd but a year on the Portrush man has captured his first senior major eleven years after hoisting the Claret Jug at the 2011 Open Championship at Royal St. Georges.

“It feels pretty awesome to do the double”, he said. “I’ve made no secret of the fact that I wanted to win this more than anything. From when I turned 50, this is the one you wanted to win, so I could set it beside the other one.”

“So, it’s a pretty good feeling right now. Very privileged to get my name on The Open trophy and the Claret Jug, and now to get my name on this one as well and go beside some legends of the game. I feel very humbled and very honoured.”

And after the memorable no-sleep victory celebration of 2011, Clarke was quizzed how he would celebrate winning a second claret jug.

“This doesn’t hold as much (laughter) but I’ll have a few celebratory drinks tonight,” he said.

New Zealand’s Steven Alker was once again in the thick of the action, however, a lacklustre final round 70 left him two strokes behind Clarke for his 9th top-3 of the season.

Leading the Australians was Stuart Appleby, who fell fourteen places into outright 19th after a disappointing 4-over 74 and a shot ahead of Peter O’Malley in equal 20th place.

Richard Green (T41), John Senden (T47) were the only others to make it through to the weekend.