Rod Pampling has secured another impressive finish on the PGA Champions Tour with a share of 4th position, two strokes behind winner Darren Clarke at the Sanford International.

Last month Pampling won the Boeing Classic and from his 29 starts so far this season, the Queenslander has recorded nine top-10′s and 22 top 25′s to pocket $US1,654,185 in earnings and ranked 11th in the Charles Schwab Cup. 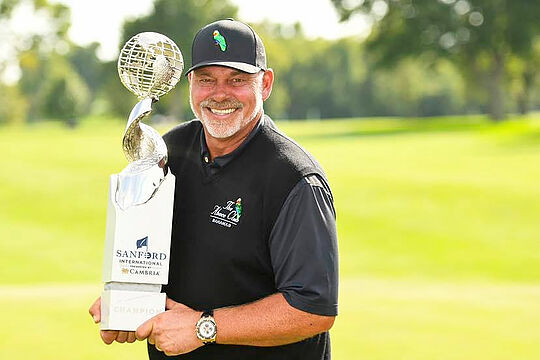 A three time winner on the PGA Tour, the 51 year-old is relishing the opportunities playing the Champions Tour brings.

The victory was Clarke’s third on the Champions Tour this season, having won at the Timber Tech Championship late last year and at the Mitsubishi Electric Championship in January. Clarke closed with a 5-under-par 65 with a birdie on the last to force a playoff with K.J Choi and Steve Flesch at 12-under.

“It’s nice to get back in the winner’s circle again,” said Clarke. “In the playoff you never know what’s going to happen, anybody can make birdie and luckily it was my day today.”

On Saturday, Choi held a two stroke leading going into the final day but a final round 69 against Clarke’s 65 eroded his advantage along with Flesch’s closing round of 66 to force the playoff.

Along with Pampling, another two Aussies finished inside the top-11. John Senden racked up an 8-under total to share 7th position, with David McKenzie a shot back in a share of 11th position.

Pampling heads the Aussies on the money list in 11th place. With Sunday’s win, Clarke moved four places to be 9th with season earning of US$1,732,593. Jim Furyk currently tops the rankings with US$2,547,730 in earnings from 21 starts.