Indian star S.S.P. Chawrasia romped to a commanding seven-shot victory to successfully defend his title at the US$1.75 million Hero Indian Open on Sunday.

The 38-year-old Chawrasia, who triumphed by two strokes last season, ground out a final round of one-under-par 71 to seal his sixth Asian Tour victory and fourth European Tour title at the demanding DLF Golf and Country Club’s Gary Player course with a winning score of 10-under-par 278. 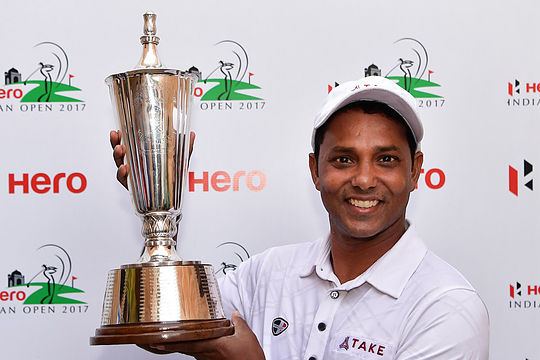 Victory was worth US$291,660 and pushed him up to second place on the Asian Tour’s Order of Merit behind American David Lipsky.

Malaysian rookie Gavin Green, playing on a sponsor’s invite, finished an impressive second after signing off with a 75, with his sterling effort sealing his full playing rights for next season after picking a runner-up cheque worth US$194,440.

Returning to DLF early Sunday to complete the last seven holes of his third round, the straight-shooting Chawrasia opened up a two-shot advantage after 54 holes, thanks to three straight birdies from the 13th to 15th holes.

Throughout the final round, the local hero was never threatened, extending his lead to five through the turn after he bounced back for bogeys on six and seven with birdies on eight and nine.

Another birdie on 13 put daylight between him and the chasing pack and Chawrasia soon strolled home to his “best win” of his career yet in front of his adoring fans.

South Australian Wade Ormsby finished the best of the small Australian field lined up this week in New Delhi closing with a 71 to move into equal 22nd.

Terry Pilkadaris was the only other Aussie to make it through to the weekend and finished in a tie for 40th following a third round 80.