England’s Holly Clyburn capped off a productive trip Down Under by capturing the Bing Lee Fujitsu Women’s NSW Open at Oatlands Golf Club in Sydney on Sunday.

With rounds 69, 66 and a final round 70 after holing a testing metre-long putt for par on the final green, Clyburn finished at 11-under-par, one clear of NSW’s Rebecca Artis (68), Austrian Christine Wolf (64), Scotland’s Vikki Laing (67) and Switzerland’s Fabienne In-Albon (69). 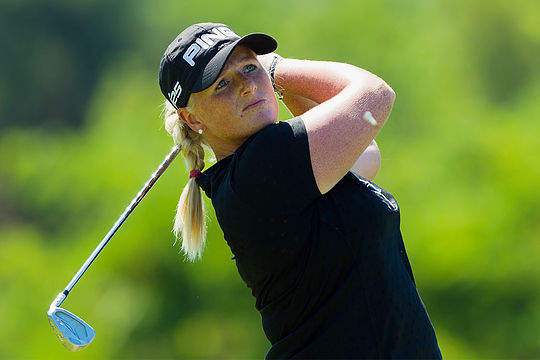 The 24-year old from Grimsby has featured prominently in several events over the past month, including a tie for second at the Oates Victorian Open last month.

However, the prospects of her making the tee at Oatlands let alone contending looked decidedly bleak a week ago when she was forced to withdraw from the Women’s New Zealand Open due to a hip injury. A week of rest and the magic hands of the physio clearly paid dividends.

”I wouldn’t have gotten through this week without him.” Clyburn said, after claiming a tight win over a cluster of players.

At one point on the back nine, five players shared the lead at 10-under-par. A birdie at the par-four14th hole eventually sealed the result, giving Clyburn her third professional victory after wins on the Ladies European Tour (LET) Access Series and LET.

“It means a lot, a have been knocking on the door for a few months now, I have been working hard and did not have any expectations this week after last week, so yeah, it has just been great and a weight has been lifted off my shoulders.”

Garrett also scooped the pool by capturing her first Club Car Series Bonus Pool title, played out over the pro-am series and State Opens of the summer. Garrett was presented with the bonus pool cheque of $6,500 with comeback queen Rachel Hetherington finishing second on the table, collecting $3,500.

“I’m so excited to have won the Club Car Series. Kevin Gates and his distributors have been fantastic supporters of the ALPG over the years and we can’t thank Club Car enough,” Garrett said.

“It is exciting, I wanted to get my name along the other great players to have won, so I am pleased to have done it. It’s great to have the Club Car Series, today for example, you really want to play well for the Club Car, as well as the tournament, it’s nice to have something else to go for.”