Brett Coletta and Jamie Arnold have secured a top-5 finish at the Pinnacle Bank Championship on the Korn Ferry Tour with the Aussie pair finishing in a share of 4th position, five strokes behind eventual winner, Norway’s Kristoffer Ventura.

Coletta’s result on Sunday sees him move to 22nd on the season money list and after missing six consecutive cuts from late-May to June, the Victorian and former US Amateur Medallist has recorded a runner-up and T4 in his last two starts in what is an impressive turnaround of form. 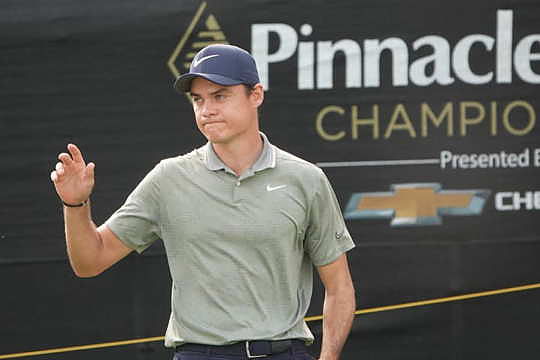 With the result, Coletta has moved 43 spots in the standings and is now on the verge of being promoted to the PGA Tour for next season.

Indicative of how quickly things can change on the Korn Ferry Tour, Ventura went from having conditional Korn Ferry Tour status with zero starts to a PGA Tour member in a matter of only eight weeks.

It began with a sponsor exemption into the BMW Charity Pro-Am last month, where a T3 secured his spot for remainder of the season. Three weeks later, he moved inside the desired top-25 after winning in a three-hole playoff at the Utah Championship.

After Sunday’s win at The Club at Indian Creek, Ventura is at No. 6 on the standings to cement his position for the PGA Tour 2019-20 campaign.

Arnold and Colleta pocked US$22,620 for their efforts.

Rhein Gibson, who has already secured his PGA Tour card for next season, finished in a share of 27th position to sit at 7th on the standings.

Brett Drewitt fired 6-under-par total to record a top-25 result in a share of 18th, his fourth top-25 of the season.