In a matter of just a few short days, Brett Coletta has cast aside any lingering regret from his final round stumble in last week’s Asia Pacific Amateur to take a share of the lead at the halfway mark of the Isuzu Queensland Open in Brisbane.

A first round three-under 67 in calm conditions around the Brisbane Golf Club layout had the 20-year old Victorian well positioned behind the leaders but in more windy conditions on Friday, Coletta’s one-under 69 has him in a share of the lead (with fellow Victorian and good mate Lucas Herbert) in a professional event for the first time. 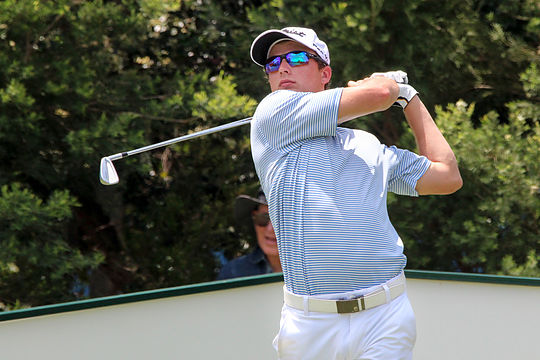 “Yesterday’s back nine was good but today was a bit of a different story. There’s not an easy hole out there today as it was quite breezy. I’m pretty delighted and happy with my score.”

The young Victorians sit atop the leaderboard at four-under, a shot clear of South Australian Max McCardle and Kiwi Mark Brown at three-under.

Coletta’s finish to the round might have gone a little pear shaped if not for a combination of some good fortune and even better short game imagination at his final hole.

After dropping a shot at the 8th hole (his 17th), Coletta’s tee shot looked destined for a sandy grave on the 420m par-four 9th which was playing straight back into the wind.

However, Coletta caught a break when his ball pitched and stopped in the narrow gap between the two fairway bunkers, giving himself a chance to reach the green in two.

“It was like Christmas when I was walking up there and saw the ball between the bunkers. I was in the bunker yesterday and it’s no good.”

Coletta’s problems weren’t over however as a pulled second shot left him a pitch from around 20 metres across a steep slope up to the green.

Using skills honed from growing up on the Melbourne sandbelt to great effect, Coletta opted to play a bump and run with a long iron to run the ball up the slope. He judged the shot to absolute perfection to leave himself a short par putt for his one-under 69.

“Probably one of my best shots of the week so far.” he said after the round.

Some small ‘wins’ like this going his way after his troubles last Sunday may be all Coletta needs to make a real fist of winning the Queensland Open title at his first attempt, after just a handful of starts against the professionals over the past two years.

His closing round 75 to lose the Asia Pacific title and a trip to the 2017 Masters to fellow Aussie Curtis Luck by a stroke certainly stung and he’s had to be reminded of it in just about every interview he’s conducted so far this week.

However, he hasn’t shied away from the questions and his mature and thoughtful responses in the face of such a disappointment have been admirable.

“What I did was take the positives out of last week (in Korea) and carried them on to this week.” he said “I’m going to rate myself on how I do that and I’m doing a good job so far.”

“Now I get another new experience, leading a pro tournament into the weekend.”