Aussies Brett Coletta and Ryan Ruffels are certain to make the top-64 matchplay section of the US Amateur being played at Olympia Fields Country Club south of Chicago.

With the second round of qualifying stroke play suspended at 7.30pm local time due to adverse weather a number of groups have yet to finish. 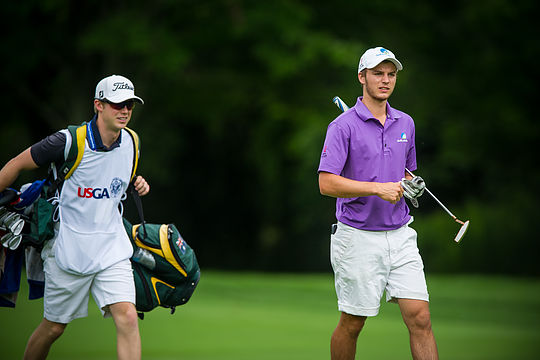 Brett Coletta looks certain to take medallist honours at the 2015 US Amateur as second round play was suspended due to bad weather (Credit: Anthony Powter)

Coletta fired qualifying rounds of 67-67 to be the overnight clubhouse leader at 7-under, a stroke ahead of American David Oraee. The Aussie’s ball striking and course management today was superb and with fellow Aussie and gun player, Ben Eccles, on the bag, the Victorians are combining well.

Coletta, who is on his maiden tour of the US, is keen to stamp his mark on this the US amateur circuit.

“You know, at home, everyone says this is the tournament to get in to,” said Coletta at his press conference after his second round.

Should Coletta retain his lead he will take medallist honours and be the top-seed leading into the elimination match play rounds scheduled to start Wednesday afternoon local time. Yet the young Victorian is eyeing off the big trophy.

“That’s just a bonus,” said Colette should he secure medallist honours. “My goal this week was to get into match play, and at this point it looks like I’m going to get in, so I’ve already achieved my first goal.”

Ruffels played tradesmen-like golf during his second round 72 after opening with a 66 and is currently at 2-under-par.

Ruffels holed some great putts on a day where he was not quite on song, yet minimised the damage with great course management and smart play to enable him to keep a respectable score on the card.

“I didn’t play good today,” said Ruffels. “I kind of really struggled to get anything going. Didn’t make a birdie out there, which is a bit annoying, but really managed to keep myself in the tournament and not let it get away too quickly, which it can do out here, so I’m really proud of the way I fought it out today.”

New Zealand’s Josh Munn is also having a great US Amateur and is equal with Ruffels at 2-under in a tie for 9th position.

With the projected cut to be 3-over-par, Lucas Herbert looks to miss the match play segment by a stroke after firing rounds of 74-70 to be at plus-4 and in a tie for 79th position.

Austin Bautista is currently at 6-over and will need to make a move to be within the top-64 and ties. Curtis Luck is at 6-over and still out on the course, along with Troy Moses at 7-over.

Cameron Davis fired rounds of 77-72 to miss the cut finishing at 9-over along with Anthony Murdaca who finished at 11-over-par.