Belgium’s Nicolas Colsaerts came within an inch of creating long overdue European Tour history in recording the Tour’s first round of 59.

The Callaway golfer was in sizzling form grabbing two eagles and seven birdies but just missing out on birding the 18th in an impressive 11-under par 60 to seize a three shot lead on day one of the Portugal Masters. 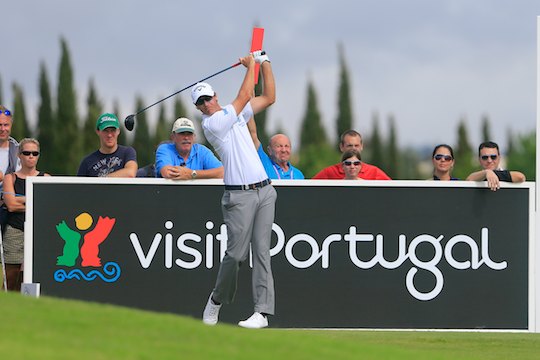 And while Colsaerts watched in agony as his 18-foot record-setting putt just missed it is still his lowest score on the European Tour and two shots fewer than a previous career best of a pair of 62s and with the last being a course record in the 2005 co-sanctioned Enjoy Jakarta Standard Charter Indonesian Open.

And Colsaerts score is the 19th round of 60 in the history of the European Tour.

“I started to think about shooting 59 when I was standing on the 16th tee as I had just eagled 15 where I drove the green about 10 feet left of the hole and sank the putt to realise then that if I birdied the last three then it would be that famous figure in golf,” he said.

“It is a golf course where you can go low as there is not a lot of rough whereas the greens are a lot more tender the last couple of years and receptive so you can throw any iron into the them and they pretty well stop where the ball lands.”

The popular golfer had raced to seven under par through 12 holes but stalled before rolling in eagle putts at the 15th and 17th holes to set up hopes of the magical sub-60 score.

Colsaerts used his new Callaway Big Bertha driver to split the fairway with a booming drive down the last that left him a short iron into the island like green and, as he walked towards the green, he was able to share a joke with playing partner Branden Grace, who shot 60 at Kingsbarns in the Alfred Dunhill Links Championship two years ago.

Colsaerts’ putt looked on course to drop until the final few moments as he instead had to be content with a 60.

After losing his card on the PGA Tour, Colsaerts has returned to Europe to rekindle the form that two European Tour victories including fourth in his last event, the Wales Open.

However at 85th on the Race to Dubai Colsaerts now has given himself a great chance of breaking into top-60 and qualify for the Final Four Series.

“I came back to Europe in June and it took me a couple of weeks to get back into the routine of competing here in Europe again after having been competing in America for so long,” he said.

“But whatever happens at the end of this week I am going to be quite happy getting into the bigger events or be quite happy to take two months off, so it’s a win win for me.”

The closest of his rivals were Frenchman Alexander Levy and Jamieson, who had set the target mark for the afternoon starters with a round of 63.

Frenchman Levy was first to haul in Jamieson, who operated with a new putter after missing the cut in his previous three tournament, after 14 holes but he was unable to go on.

Instead it was Colsaerts who took charge as his recent return to form gathered extreme pace on the back nine.

The 2012 Ryder Cup winner has missed the cut in half of the 14 tournament he has played on The European Tour this season, but has found some touch in the past month.

He had made his past three cuts before heading to the Algarve and last time out finished in a tie for fourth at the ISPS Handa Welsh Open.

A string of four birdies from the ninth moved him to seven under before he leapfrogged Levy and Jamieson into the lead with the first of his eagles as his power dwarfed the 315 yard par four 15th.

At the penultimate hole he was able to clear the water – which Jamieson had earlier found in the only blemish of his round – to open up his chance of a 59 up the last.