It was a final which promised so much with some of the best amateurs in the country going head-to-head for Club pride and the honour of winning Australia’s highest inter-club challenge.

The early stages of the final had matches evenly balanced, yet by the turn Commonwealth had applied the accelerator to be up in five of the seven matches. It would prove the turning point of the final as the Commonwealth team effectively shut out any hope of Victoria gaining momentum in the final.

Lucas Herbert playing at number 1 for Commonwealth was nothing short of spectacular in his match against Ryan Ruffels. This match was a corker and the huge crowd was not disappointed with the precision golf on display. 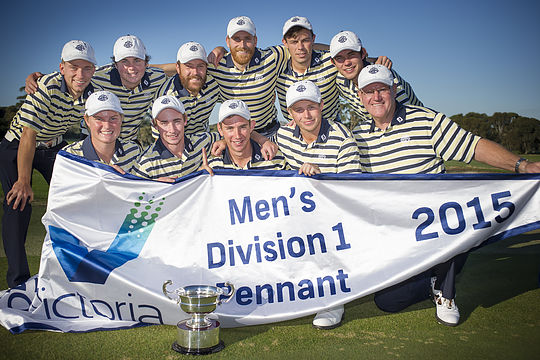 Herbert was quick out of the blocks, winning the opening hole and with an eagle at the second on Royal Melbourne’s West Course sent a sign to Ruffels that he meant business. Ruffles was effectively shut out of the match with the firepower Herbert unleashed in the benign conditions on one of the world’s best layouts.

Herbert would wrap up the match 4&3, having shot the equivalent of 7-under-par through 15 holes. Ruffels could only watch – and it was not that he was playing that poorly either, peppering the pins with his approach shots seeing a number of holes halved in birdies.

Many times a pennant final is won from the bottom order up, yet today it was Commonwealth’s top-order who got the result.

Frazer Droop won 2&1 over Ben Eccles in the number 2 match and Tom Couling at number 3 secured a solid 4&3 win over Leonard Chin. Commonwealth’s top-order had delivered the goods and taken the pressure off the lower order team mates.

Victoria’s only win came with Konrad Ciupek’s victory on the 19th over Craig Hasthorpe at number 4.

Cameron John won his 5th order match against Luke Mills with a 4&3 and Matt Hinkley at number 6 for Commonwealth was too strong against Jack Sandic winning 6&5.

With the result already determined the number 7 match between Garry Sluce and Luke Murnane was declared all square.

Commonwealth are deserved winners of this flag. Three weeks ago this was a team that needed to win the closing matches or risk missing the final. The team dug deep and produced the results at the right moment.

Inter-club golf is one of the best things going for our sport and what was showcased at Royal Melbourne on Sunday was priceless. Car park overflowing with supporters who came out in their numbers, the stands selling out of sausages given the sheer volume of spectators and a display of sensational golf.