The Commonwealth team was undefeated this season finishing at the top of the ladder with seven match wins to take the top spot from Metropolitan and again proved too strong during Sunday’s final.

Zac Murray put on a classy display of golf with the Victorian Amateur champion securing Commonwealth’s first match with a 8&6 victory at number three against Blake Collyer.

Murray was all class during the final and with Commonwealth having the added benefit of having a talent like Murray as their number three and with the top order of Drakeford and Herbert, Metropolitan was always facing a stern challenge in the final.

Yet this was a final which was a closer affair than the score indicates. 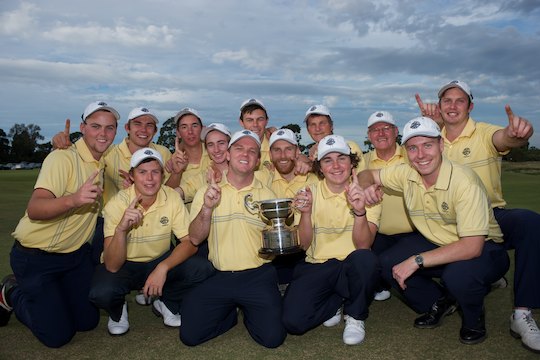 Metro’s lower order took the lead early with Dough Francis at number seven, 1-up through 11 before Tom Couling snatched the victory on the 19th.

Commonwealth last won the Division 1 title in 2009 and is a club with a rich pennant history having secured the Division 1 flag title on eleven previous occasions.

The sheer weight of Commonwealth’s top-order with Drakeford, Herbert and Murray was certainly impressive, yet as history tends to show, pennant flags are often won from the bottom-middle order up, not from the top order.

Sunday’s final was no different with the balance of the final arguably turning with Frazer Droop’s gutsy effort playing at number four for Commonwealth.

Droop was locked in a titanic battle with Ted Donoghue with their match barely separated by a hole all day.

On the 16th Droop sunk a wonderful putt to apply pressure going down the last with the pair locked all-square.

As the hundreds of supporters from both clubs gathered around the pair on the 18th the tension in the air was so think you could cut it. Droop pushed his drive to the left leaving a difficult approach, whilst Donoghue hit a majestic drive to split the fairway.

The advantage seemed to turn to Metro as everyone knew the outcome of the final would probably rest with this match. After Droop came up short with his approach, Donoghue needed to hit the centre of the green to gain the upper hand.

Match play golf is all about pressure and both these two where certainly feeling it.

Donoghue’s approach also came up short and right landing in the green side bunker from 158 metres out. The miss would prove critical after Droop recovered with a pressure up-and-down to win the match 1-up.

Droop ended the series undefeated and certainly proved his worth in the final.

Lucas Herbert at number two for Commonwealth accounted for Lukas Michel, 2&1, and with the outcome determined, the top-order of Todd Sinnott and Geoff Drakeford ended their match on the 16th green to be all-square.

Sinnott demonstrating grand sportsmanship after being 2-up at that stage of the match.