Concord Golf Club have taken the 2015 Eric Apperly Shield with a narrow win over Monash Country at the weekend to collect the club’s first shield in the series.

The final was a closely fought contest with Concord’s number 6, James Gleeson, securing the vital opening match with a 4&3 win over Monash’s Patrick Rennemo. 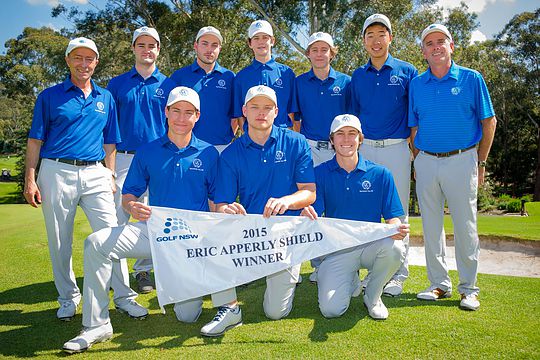 Monash squared the ledger with their number 7, Lachlan Robinson, winning 1-up over Josh Gadd before Concord’s team captain and number 6, Mitch Norbis won his match 4&3 over Tommy Pritchard-Davies.

When Jac Delany scored a vital 2&1 win in the number 3 position over Nathan Barbieri, Concord had three matches in with the top two precariously in the balance.

Jordan Mackay at number 2 for Monash gained a solid 3&2 win over state representative Nick Watts, who’s just returning to the game following injury, to keep Monash in the final.

The attention then turned to the top-order match between state representatives Jason Hong from Concord and Brayden Peterson from Monash. Peterson played solid and was able to keep Hong out of the match, winning the vital point with a 3&1 victory to keep Monash’s final hopes alive.

After the six match play matches of the final proper had ended in a 3-3 draw, extra holes were required with Hong and Petersen forced into a sudden death play-off hole up the par 3, 170 metre 18th at Pennant Hills Golf Club.

With the pair halving the first play-off hole, tension mounted as they returned for a second time. Both players nailed their mid-iron tee shots to the upper tier level of the green where the pin was tucked back right.

When Peterson’s birdie putt rushed pass the cup to finish some 2 metres from hole, Hong needed only to edge his putt down to place pressure on his opponent which he did.

Peterson was not able to save par seeing the Concord team gaining victory in a final which could have gone either way.

The Eric Apperly Shield is a six man under-21 team match play event played between Clubs throughout NSW without the benefit of handicap.

On the way to the final Concord needed extra holes in their semi-final to claim a narrow win against the defending champions St Michael’s, who had three new players under 16 years of age competing in their six man team following new changes by Golf NSW this season which set the age eligibility for the series to under 21 years.

In the other semi-final Monash defeated The Australian, 4½-1½.

Full credit to the Concord Golf Club and to member, Liz White, who eight years ago started the Concord Development Program with the aim on winning events like the Eric Apperly.

Concord certainly has made its mark in fostering growth in the game and on the back of such a successful season, other club celebrations are sure to follow in the future.