Concord brought home the victory on the back of an impressive closing stretch from Doey Choi at number 1 who came in with a birdie – birdie finish on the 17th and 18th holes over Stephanie Kyriacou to nail her team’s victory. 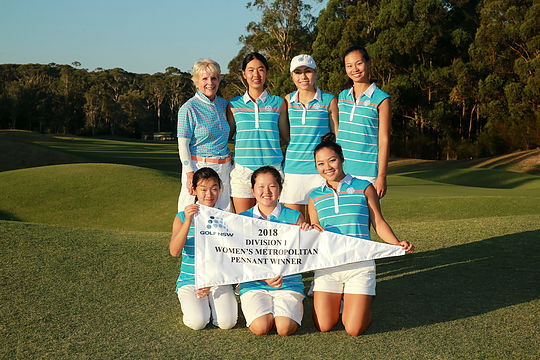 Concord, who lost last year’s final to Avondale, were rightly ecstatic going the extra distance with strong performances on the day from Claire Shin winning the number 5 match over Pamela Tsiamis, 3&2, to get the first match for Concord, as well as Sophie Yip at number 3 for Concord who secured an important 2&1 win over Casey Cook.

When Danielle Vasquez at number 4 for St Michael’s won on the 19th hole over Yerin Kim and Kelsey Bennett nailed a 4&3 victory over Belinda Ji at number two, the outcome of the final turned to the top-order match.

If ever there was a time to close the gate on a match, Choi’s timing was immaculate with a string of two birdies, which effectively was the turning point of the final.

In the Division 2 final, Stonecutters Ridge collected their first Women’s Major Pennant flag with a 3½ to 1½ win over Pymble.

Madelyn Hagerty at number 5 for Stonecutters Ridge was out early and bagged her match with a 5&4 win over Lisa Green. When Pymble’s Shaun Bennet at number 4 won her match 2&1 the final was evenly locked.

It would be Stonecutters Ridge’s middle order that would deliver the decisive blow with Brielle Mapanao at number 3 winning 3&2 over Robyn Jackson, and Helen Haynes accounting for Toni Sinclair with anther 3&2 victory at number 2 to see the desired 3 matches in and victory for Stonecutters Ridge.

With the final determined the top order match of Lia Lavelle and Annika Boyd was declared halved.