Steven Conran from New South Wales has taken out the 2013 Ron Crouch Transport Wagga Wagga Pro-Am by a single stroke, holding off Yenda Pro-Am champion from only a few days ago, Chris Gaunt, and overnight leader Grant Thomas.

Conran, a tour veteran and multiple winner on tour, carded consecutive rounds of four-under-par 68 for a total of 136. 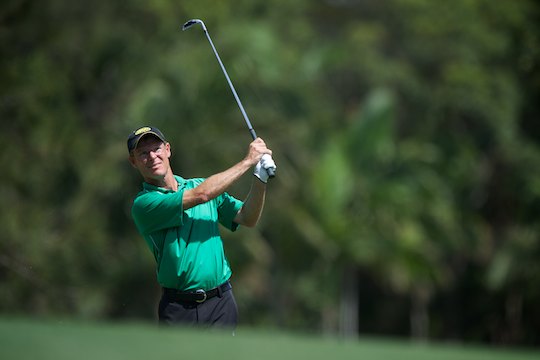 Playing in the final group with Thomas, the likeable right-hander opened up a three-shot-lead on the back nine after some misfortune for Thomas saw the overnight leader fall off the pace.

“I played well in the conditions, it was a tough day but didn’t make any costly mistakes and holed a few putts which proved to be the difference” said Conran.

PGA drawcard Craig Parry lead the final few groups out, and although the iconic tour legend struggled with the slippery conditions, Parry still managed to thrill galleries with glimpses of greatness.

“I loved coming out for the event, everyone does a wonderful job and hopefully I can come back again soon,” commented Parry.

Heavy rain halted play during the early stages of the afternoon on Thursday. For many, it seemed doubtful the final round would be completed.

Tournament Chairman Ashley Briggs and Major Sponsor Ron Crouch were keen to give players a chance to complete their round and play resumed with only the professionals returning to the course.

The risk paid off for Briggs and Crouch, the final pairing joined by an enthusiastic gallery overlooking the beautiful Lake Albert on the par-three 18th finishing hole, only minutes before darkness.

Wagga was the final stop on a three event swing in the NSW Riverina region.