Alongside Minjee Lee, NSW’s Rebecca Artis could lay claim to be being Australia’s most consistently performed player on the world stage in 2015, with a series of solid results on the ALPG and Ladies European Tours to date.

However, in cold, blustery conditions, Artis took her performance to another level climbing from six strokes adrift to surge to a brilliant win over world number seven Suzanne Pettersen at the Ladies Scottish Open. 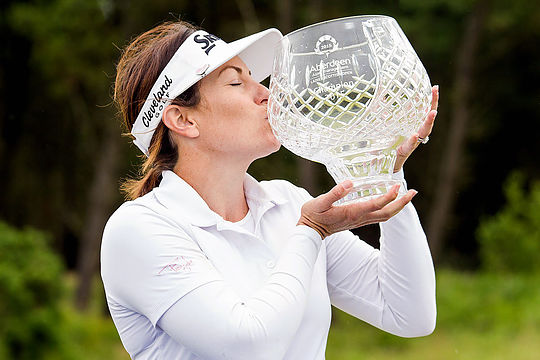 Artis shot a tournament low six-under 66 at the Dundonald Links to finish at six-under par, two shots ahead of the Norwegian.

“Sometimes you fight all your life to try and get that first win and sometimes the second win is maybe even harder,” said Artis, who won in similar conditions at the Helsingborg Open in Sweden two years ago when she came from five strokes behind to win.

“I’ve been playing some really consistent golf since the start of the year, putting myself in contention week in, week out. I knew that with the conditions the way they were predicted to be today that if I went out and played some solid golf, then I wouldn’t be far away.”

“I’ve got my coaches over here from Australia, Gary and Luke Edwin. Whenever they’re around I feel like I go to a new confidence level with my overall game.”

England’s Holly Clyburn ended two shots further back in third ahead of Klara Spilkova and world number two, Lydia Ko. Stacey Keating finished in a tie for 8th place and Bree Arthur, a tie for 49th.

Artis recovered from a potential momentum-killing double bogey at the 4th by responding with consecutive birdies at the 5th and 6th, then another at the 8th.

“To come back and birdie five and six straight after that was huge to get the momentum back on track and not let it bother me,” she said.

Artis then birdied three in a row from the 12th and, critically, chipped in from long range for another at the 16th before Pettersen dropped a shot on the hole to fall one behind.

Needing to birdie the par-five finishing hole to force a tie, Pettersen attacked the green in two but came up short in the burn guarding the green for a costly bogey.

“I played pretty well today and gave myself a lot of chances. It was not on the easy side. For Artis to shoot 66, she definitely deserves to win,” Pettersen said.

The second win of Artis’ Ladies European Tour career has moved her up to No. 100 in the women’s Rolex Rankings, the third best Australian behind Lee and Karrie Webb, heading into next week’s Women’s British Open down the road at Turnberry.

Lee, Webb, Artis, Keating, Sarah Kemp and Su Oh will fly the Australian flag at Turnberry, looking to join Greg Norman (1986) and Webb (2002) as Australian winners of an Open Championship at the course.