Pierceson Coody secured a dominant five stroke win taking out the Live and Work in Maine Open on the Korn Ferry Tour on Sunday. 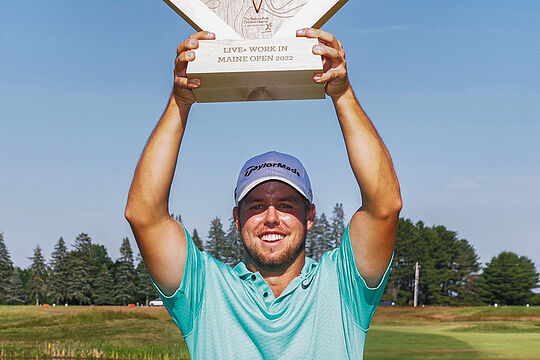 “It’s crazy. It feels like a blur,” said Coody. “I knew the front nine was gettable and I knew in the afternoon this back nine plays tough. I just played it really aggressive on the front nine, just great numbers, really nice putts. Just everything seemed to go my way. The back nine is tough. It gets blowing, 15-20 miles an hour and some tougher pins, so I just kind of held on.”

The victory vaulted Coody to No. 31 on the season’s points list where the top-25 at the end of the year earn PGA Tour status.

“Finishing first on the PGA Tour University was in itself just such a huge goal,” said Coody. “The one day that I was in Dallas before I went to the BMW we talked about how getting a top 75 was just the big goal. Hopefully I can just keep playing with this kind of momentum and see where it takes me.”

It was revealed this week that Coody had been approached by LIV Golf officials with a multi-million dollar offer for him to start his professional career in their series.

Curtis Luck finished the best of the Australians in a share of 15th position with a final round 65 moving him thirty-nine places up the leaderboard. Luck was the sole Aussie to make the weekend with Rhein Gibson and Ryan Ruffels missing the 1-under cut mark.