American Austin Cook sank a 8 metre birdie putt on the final hole to seal a four-stroke victory at the RSM Classic on Sunday to claim his first PGA Tour title.

The 26-year-old had a final-round 3-under par 67 to finish on 21-under with fellow American J.J. Spaun carding a 66 to secure a runner-up finish at 17-under with Brian Gay another stroke back.

Cook began the final round on Sea Island with a three-shot lead but his advantage was reduced to just one as J.J. Spaun made a run on day four.

Cook had earlier dropped a stroke at the second hole but did not let the pressure get to him and remained sold for the rest of the round, picking up birdies at the 7th and 15th before topping of his round with birdie-birdie finish.

The victory in the final PGA Tour event of the calendar year gave Cook a spot in the Masters next year as well as The Players Championship.

“It was definitely exciting…real brutal with the wind,” Cook said. “I got off to a slow start but I was able to keep my head level and know there was a lot of golf to be played. With the wind and those conditions, a lot could happen.”

It’s the second year in a row that a rookie won the RSM Classic. Mac Hughes survived a five-way playoff to capture the title last year. The 26-year-old from Arkansas became the fourth consecutive winner of the event to make it his first PGA triumph. 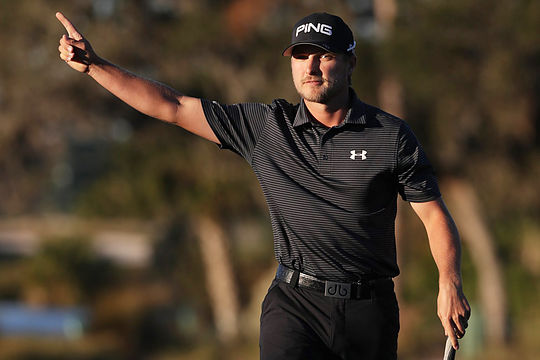 Cook, who will jump from world number 302 into the top 150, came into the event with three top-11 finishes on the PGA Tour and was able to keep his composure when it counted having experienced being in the breech coming down the closing stretch before.

“Whenever something bad happened, I was able to brush it off and stay in the moment. The nerves and everything on the inside, it wasn’t stress free. I got too far ahead of myself (in the past) and pressed a little bit. I’ve learned from that and now I’ve been able to play my game and let golf happen.”

A graduate of the Web.com tour, Cook will receive an exemption on the main tour through to September 2020.

“My goal coming into the year was to win Rookie of the Year, and I’m on a good path so far,” Cook said.

Sunday’s win so early in the season is certainly the start Cook was looking for and given Cook made just two bogeys on the week and only missed four fairways over 72 holes he certainly has the game to compete.

Cameron Percy was the only Australian to make the weekend but close with a 77 to finish in a tie for 70th at even par.