In his first appearance at the tournament, Cooke started the day with a two shot lead before going on to win the title by two shots from Jack Wilson with rounds of 71, 65, 64 and 70 for a tournament total 18-under 270. 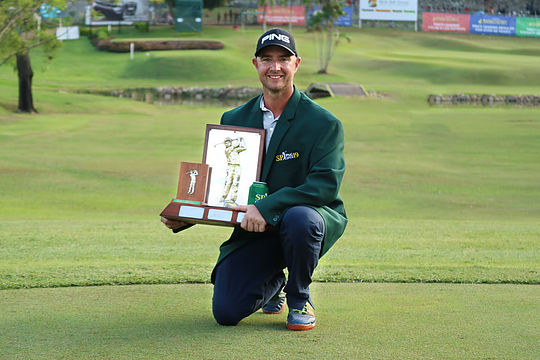 “I didn’t watch any scores through the whole round today so I didn’t really have any idea where I was at when playing the last few holes,” said Cooke.

“Obviously we had the scoreboard for our group but I kind of had to wait until I’d holed the last putt and just judge by the reaction of everyone and ask a few officials. Once I got the okay and all clear, it was awesome, I’m stoked.”

Winning the SP PNG Open marks Cooke’s maiden win on the ISPS HANDA PGA Tour of Australasia after finishing runner-up at the WA PGA Championship in 2014.

“It’s awesome,” said Cooke. “I’ve obviously waited a long time. It’s what I live for, I love golf and I’ve always wanted to be a pro.

“This justifies a lot of hard work that I’ve put into the game so it’s so satisfying and such a great feeling.”

Maintaining his lead for the duration of the fourth round, an eagle on the par-5 8th hole helped to extend Cooke’s lead with birdies on the 12th and 13th holes helping to seal his fate.

Holding a four-shot lead on two occasions in the final round, the competition closed in as the tournament came to its conclusion with runner-up Jack Wilson firing three birdies in a row from holes 14 to 16 to bring the margin down to two shots.

Admitting the nerves crept in as he played the final few holes, Cooke was pleased he was able to maintain his composure to close out the tournament.

“I honestly was just thinking to myself, ‘don’t do anything silly, and just play smart golf. I don’t have to force anything, I’ve got a couple shot lead’.

“I didn’t let anything get to me for the whole day.”

Cooke’s maiden win secures the South Australian an exemption on the ISPS HANDA PGA Tour of Australasia until the end of the 2020 season and opens doors around the world.

“With the exemption that you get from it now I can probably have a look at a Japanese Q-School or something like that. It’s exciting.”

Praising the condition of the Royal Port Moresby Golf Club course, Cooke enjoyed the experience in the heat of Papua New Guinea.

A tournament total of 16-under the card secured second place for Jack Wilson, while a very competitive Jordan Mullaney tied for third place alongside Kade McBride at 14-under the card.

Dale Brandt-Richards, Brady Watt and Blake Proverbs tied for fifth position at 13-under the card.