Claiming victory on the 38th hole with a par, Cooper was ecstatic after securing his first major amateur title. 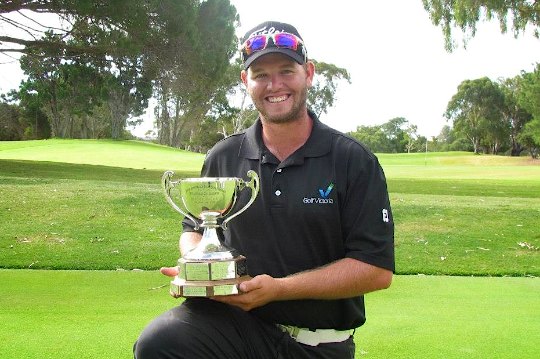 “I came to SA for a good result. I won my first Ivo Whitten event in early February, but I’ve missed the last seven cuts in national events over the past four months,” Cooper said.

The Victorian is the first interstate player to win the SA State Championship since New South Welshman Keith Pix claimed the title in 1951.

“I’ve done a lot of putting work with Victorian State Coaches Richard Cooney and Marty Joyce over the past few weeks and the hard work has paid off, I’m definitely relieved,” Cooper added.

However, a birdie to Cooper on the 375metre par 4, 16th, once again squared the match. Through 18 the players were square.

“I was hitting the ball really solid, a couple of 3 putts hurt, but I was able to get up and down when I needed it,” Cooper said.

With the wind picking up in the afternoon and the front nine completed, Moses edged ahead to be 2up after 27. Cooper squared the ledger with an up and down on the par 3, 12th followed by a birdie four on the 13th.

Heading down the 36th hole, with the match square, from 130 metres off sand, Moses landed his approach 15 feet from the pin, while Cooper overshot the green and faced an up and down to save the match.

Moses’ mid-range attempt came agonisingly close, lipping out on the low side, leaving Cooper a 12-footer on the same line to save the match. His putt went straight in the centre of the cup forcing the match to extra holes.

After squaring the 37th hole, Cooper landed pin high right, just off the green for two, on the 314 metre 2nd hole, while Moses landed short, leaving a tricky pitch over the front left bunker.

Cooper claimed the State Championship after Moses narrowly missed a long putt to save the match.

21-year-old, Cyna Rodriguez from the Philippines, won the South Australian Women’s Amateur with a 2&1 defeat of Jenny Lee from the Glenelg Golf Club in the State Final.