Five years after letting slip U.S. Open victory at Pebble Beach and the name ‘Dustin Johnson’ is again atop of a Major Championship leader board.

Johnson had just a 90-minute break between his first and second rounds and ending in near darkness adding a 69 to his starting 67 and be in the clubhouse leading at four under par. 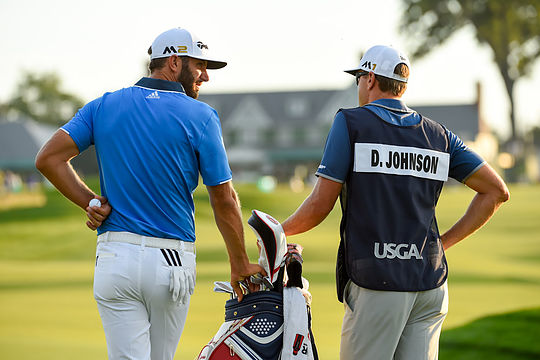 However Texas-born Andrew Landry who officially led day one has yet to tee off in his second round.

Johnson did not drop a shot in his first 27 holes as he saw birdie putts brush the hole but gains on the 13th and sixth in his second round helped move him to the top of the leader board.

“It was a long day today but I felt like I played really solid all day for all 36 holes,” he said.

“I drove it really well, hit a lot of great iron shots. I felt like I rolled the putter really nicely too. So I’m very pleased with how it went today.”

“I hit so many good putts today that I thought were going in and burned the edge or lipped out. But that’s just how it goes. I mean, these greens are tough.”

“I felt like I was doing everything correct. I was hitting all my putts where I wanted to. They’re going to go in eventually, but I made some nice putts too.

Johnson not only went close to victory on Father’s Day in 2010 but he then went to Whistling Straits later that year only to miss out in a play-off after a bizarre incident down the final hole.

We then saw a year ago at St. Andrews with ‘DJ’ being well in contention in The Open early on.

Maybe this is finally Johnson’s Major.