Country star golf fan gets shut down by Mickelson

Complain at your peril when it comes to the made-for-TV event between Tiger Woods and Phil Mickelson.

At least that what happened to American country music singer and golf fan Jake Owen. 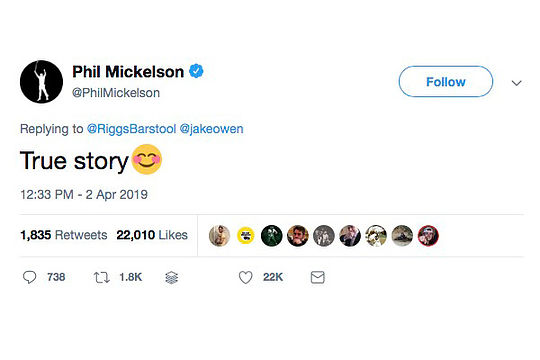 After expressing his displeasure about being ripped off after shelling out $29.99 to subscribe to the event between the two golfing superstars, Owen wanted his money back.

No-one would disagree that the match turned out to be a bit of a fizzer with “Lefty” [Mickelson] winning with a birdie on the 22nd hole.

Owen explained on the BarStool Sports podcast recently that he spotted Mickelson at Jordan Spieth’s wedding and decided to have his say about the poor golf played during the much-publicised match.

“You guys hype this whole thing up about the big match? You guys couldn’t even make three birdies between the two of you?”

Apparently Mickelson replied by pulling a wad of notes out of his pocket and commented: “I won 90,000 of these things yesterday. Take a 100 and go f— yourself!”

The story was confirmed by the man himself when Mickelson tweeted – “True story”.