This year’s Australian Open is quickly developing into an all-star shootout never seen before in the Harbour City. 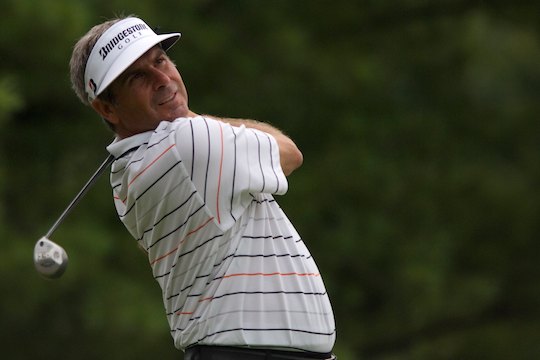 Now, popular American Fred Couples has confirmed he will compete in this year’s showpiece event at The Lakes in Sydney.

The 50-year-old former US Masters champion, who is currently enjoying an outstanding maiden season on the Champions Tour, is set to draw a big following Down Under when the championship tees off from December 2-5.

“I am very much looking forward to playing in the Australian Open, in particular The Lakes Golf Club,” Couples said.

“I have not been to Sydney for some time and look forward to visiting this magnificent city once again.”

Couples’ participation will also mean the tournament will provide golf fans with the exciting chance to see the two Presidents Cup captains before next year’s international showdown in Melbourne, where Norman will be out for revenge against Couples’ reigning US champions.

Entering the senior ranks, Couples has not lost the form that saw him become one of the biggest names in the game. This year he won his first Champions Tour event in only his second start at the ACE Group Classic and went on to win two more tournaments.

During a glittering career he has claimed the US Masters in 1992 and won 14 other US PGA Tour titles. He triumphed in the World Cup with Davis Love III for four consecutive years from 1992 and played in five Ryder Cups.

He is known all over the world as “Boom Boom” because of the huge drives he hits with his effortless and much admired swing.

Golf Australia Chief Executive Officer Stephen Pitt couldn’t hide his excitement at having yet another superstar in this year’s Open field.

“With a top-six finish at Augusta this year and three wins on the Champions Tour, Fred is an outstanding competitor and one of the world’s most exciting players to watch,” Pitt said.

“Watching both Presidents Cup captains alongside fan favourite John Daly will be a major thrill for our crowds.”

Prizemoney for the prestigious event will be US$1.3 million (AU$1.5 million) and for the second year in a row it will be the penultimate leg on the OneAsia Tour.

Last year Scott won his first Australian Open title by five shots over compatriot Stuart Appleby after a tense final round at the NSW Golf Club.

The Australian Open was first played in 1904 and has been won by the biggest names in the game. South African Gary Player has lifted the Stonehaven Cup a record seven times while Jack Nicklaus from the United States has been victorious on six occasions.

The tournament will be showcased on OneAsia’s television platform with live coverage for four hours a day across all four tournament days, and broadcast to over 260 million homes in more than 40 countries.

Full coverage of the event will be available domestically on Network Ten, as well as internationally on ESPN Star Sports, Jupiter Golf Network, SBS Golf Channel, Fox International, Sky Sports NZ, ESPN3 & America One in the USA, ViaSat & Bloomberg Television among others in Europe.