Don’t call it a comeback but next week sees the return of one of Australia’s greatest golfers with Karrie Webb deciding to make her first LPGA Tour start since the 2020 Pelican Women’s Championship.

The Hall of Famer, who spent the second half of 2021 in Australia before returning to her Florida home in the US, will tee it up in the $2 million Gainbridge LPGA field featuring 16 of the world’s top-25 players and headlined by World No. 1 and defending champion, Nelly Korda. 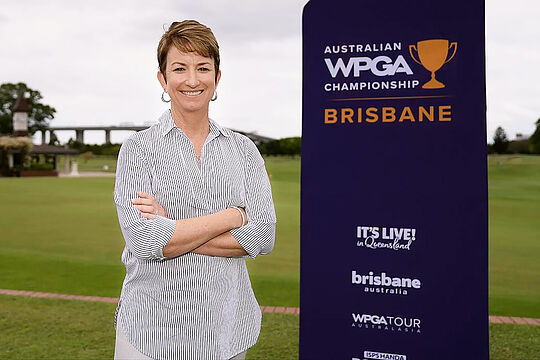 The 47-year-old recently spoke to the ABC’s Quentin Hull and discussed her COVID diagnosis just prior to Christmas, which saw her miss the launch of the Australian WPGA Championship in Brisbane and the first handing over of the Karrie Webb Cup to winner, Su Oh.

However, thanks to being vaccinated, Webb has been quick to recover although she says her game might need some more work.

“I’ve signed up for the first full-field event on the LPGA Tour schedule in Boca Raton, which is about 30 minutes from where I live in Florida,” said Webb.

“So now I’m grinding for the exam…I’m putting the hours again to see if I can be sharp enough to play a tournament so we’ll see how that goes.”

Webb, a seven-time major champion, played her last full-time LPGA Tour schedule in 2017 and has since chosen to limit her appearances to just a handful of tournaments each season including the majors and events back home in Australia.

When asked about any future plans, Webb is taking a wait and see approach.

“I’ve had a bit of a neck injury…just a wear and tear thing from 25-plus years of professional golf so it was good not to put that pressure on it last year.”

“I don’t really see any sort of full-time or part-time schedule really, it would just be a handful of events here and there…events that I like. And obviously I want to play again in Australia, that will be on the schedule for sure.”

Gainbridge LPGA will tee off at the Boca Rio Golf Club in Boca Raton, Florida from January 27th where Australia’s Su Oh will take her place in the field alongside countrywoman Katherine Kirk.