Christopher Crabtree and Japan’s Yuna Nishimura are the 2019 Riversdale Cup champions with Crabtree grabbing a birdie on the last to pip Blake Collyer and Aiden Didone by a shot to get his first breakthrough victory while Nishimura secured her three shot win over compatriot Miyu Yamashita and Aussie Becky Kay.

Riversdale has a tradition of great finishes and this was another classic battle within both the men’s and women’s championships. 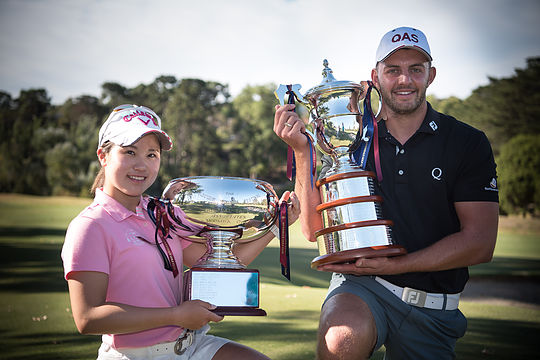 On the 18th Collyer and Crabtree were in a share of the lead at 16-under, with Didone, a former member at Riversdale, a shot behind. All but Didone went for the green on the drivable 282 metre finishing hole. Collyer and Crabtree finished left of the green in the rough and when Didone hit a wonderful chip to a metre and birdie length, another playoff looked likely.

Crabtree, 23, then produced one of his best flop shots so far in his career, landing to a metre under the hole to set up a birdie putt.

Collyer left his well short and with it his chances of claiming the title. With Crabtree away first from Didone, the Queenslander made no mistake and nailed his putt into the heart of the hole for the win.

“It’s easily the best win of my career,” said Crabtree.

“I was a late starter to this game having come from England and all you do is play soccer there, but I’ve been pushed by a number of my mates like Charlie Dann and Shae Wools-Comb, who are all pros now to keep going and thats motivated me.”

“This is a fantastic win and hopefully my world ranking will go up and that will set me up for some invites into the American events.”

Crabtree, a two-time club champion from Greg Norman’s Pelican Waters on the Sunshine Coast, was nothing but solid over the closing afternoon nine having made the turn at with an impressive 3-under, 33, before carding birdies on the 10th and 11th.

“I had a run going there in the middle of my round which I was able to get the momentum to keep going,” said Crabtree.

“Like I was 6-under through 10 holes. A bogey on the 14th kind of dinted my rhythm, but to close out with that birdie and to get the win was something I’ll remember for a while. It was mint.”

Nishimura secured her victory with rounds of 71-74-68-69 to finish at 10-under, three ahead of her nearest rivals.

“I’m very happy with the win and to play in Australia,” said Nishimura.

“This is my first victory internationally and I very pleased. It was a good week and thank you to Riversdale for having me.”

Stephanie Bunque, who was in the final group and held the lead during the tournament finished in 4th position after closing with a 74 to be at 6-under.

Bunque had her chances here at Riversdale and this was one that slipped through the cracks. That’s not to take anything away from Nishimura, who simply played precision golf all week.