Crawford checked in as clubhouse leader after 72 holes at 10-under par and faced an agonising wait for Brett Rankin to finish his round, who was also 10-under, in the group behind him. 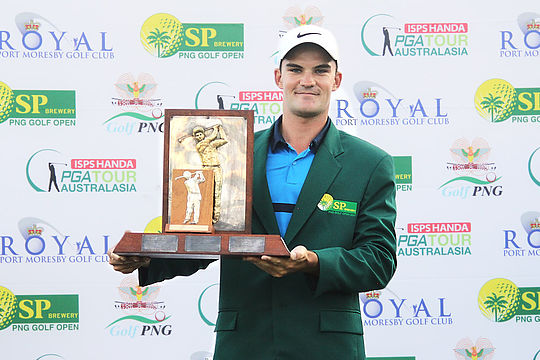 Rankin had the chance to seal victory in regulation but was only able to make par on the 18th, forcing a playoff for the second year in a row at Royal Port Moresby Golf Club.

The pair could not be separated through five playoff holes on the par-3 18th, both making par on all attempts.

On their sixth trip, both Crawford and Rankin hit their tee shot approximately 40 feet from the flag, Rankin would eventually bogey the hole giving Crawford an easy par for his first victory on the ISPS HANDA PGA Tour of Australasia.

“It definitely means a lot considering I’ve had a really rough couple of years out here so it was good to get it all together in one week and obviously to get the win is fantastic,” said Crawford, who now has full exemption on the ISPS HANDA PGA Tour of Australasia until the end of 2018.

“I haven’t won a lot of playoffs as an amateur but this was great. I mean six holes, it’s tough, it’s taxing and obviously on top of 72 holes, it’s quite hot here as well,” said Crawford, who after turning Pro in 2015, has now won the first playoff of his professional career.

“It was getting tough towards the end but it’s great to get the job done.”

Crawford said as the playoff drew longer he was playing a safe and simple game plan.

“I just kept doing the same thing, kept getting to the same spot and giving myself a chance to hole a par and in the end it worked out in my favour.”

The 24-year-old has entered the TX Civil & Logistics WA PGA Championship in Kalgoorlie from 18-21 May.

“I’ve entered for WA so I’ll head over there and try and back this up with a win, it’s always tough to win but I’ll be trying my hardest.”

For his win Crawford claimed AU$21,300 in prizemoney and is now on the ISPS HANDA PGA Tour of Australasia Order of Merit.