His swing might not be the envy of every golfer in the world., yet South Korean Ho-Sung Choi is already a world-wide golfing sensation.

And news that the 45-year-old with the “fisherman’s swing” will again have fans world-wide tuning in to watch him play the upcoming AT&T Pebble Beach Pro-Am.

Few golf fans have missed the You Tube videos of Choi launching himself after some of his drives on the Japan Tour.

Now, thanks to a sponsor’s invitation, Choi’s unorthodox chase after hitting the ball will be on full display at such famous courses as Pebble Beach, Spyglass Hill and Monterey Peninsula Country Cub from February 7-10 when the ever-smiling Asian makes his US PGA Tour debut.

And while it might bring a smile to some of his fellow player’s lips, they would be foolish to take Choi too lightly.

That’s because he already has three world-wide wins, including several theatrical swings as he secured last year’s Casio World Open in Japan. 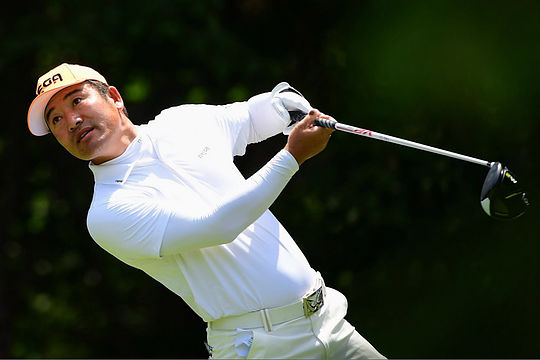 And for the few of you who have missed it and haven’t already typed in You Tube, to check him out, on his follow-through, Choi lifts his right foot completely off the ground and swings it around his body before using one of several different finishing moves.

Currently ranked 200th in the world, Choi admitted to the Korean media that he felt this day would never come.

“I’m fully aware that none of this would be possible without the love and support of my fans.”

It seems an on-line petition had been set up to try and get Choi a start in the Waste Management Phoenix Open.

“His swing is pretty awesome — it’s going to be a fun story,” said John.

“You think about what Bing Crosby started in 1937 (with this event), and it was about getting together with Hollywood friends and having a good time.

“This guy has a good time playing golf. It’s a good fit for our tournament.”

While most people see it as a little fun and great attention for the game of golf, former World No.1, Rory McIlroy, is not so sure.

“It’s gained a little bit of notoriety, and he’s a good player. I’m not sure a golf shot should mean that much to you that you’re doing that after you hit it, like it’s just trying a little too hard. You have to try hard at golf, but that’s taking it to an extreme.”