American Sean Crocker led from start-to-finish to celebrate capturing a maiden pro career title with his one-shot victory at the Hero Open near St. Andrews.

Crocker, who turns 29 next month, posted a gutsy final round 4-under 68 to hold on by a shot to win with a 22-under victory tally on the Torrance Course at the Fairmont Resort. 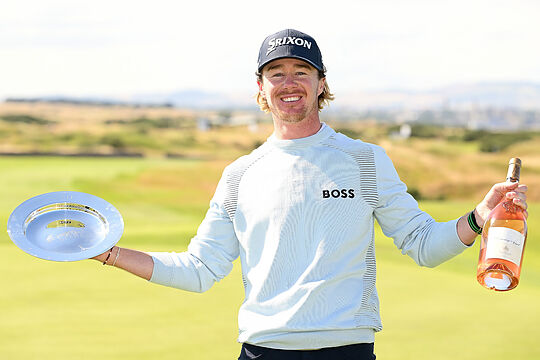 The win for Crocker comes also in his 107th DP World Tour event and is his very first taste of success in the pro ranks for the golfer, who grew-up in Zimbabwe and who once played Test cricket.

Crocker still led by a shot heading into the back nine ahead of three birdies in four holes from the 10th to reach 22-under par and stretch his advantage back to two.

But with Englishman Pepperell in the clubhouse on 21-under, Crocker endured a nervy finish as he parred his way home to sign for a closing 68 to win by a single shot.

Crocker, who started the 2022 season with eight missed cuts and a WD in his first nine events, was thrilled to hole a 10-footer to save par at the par-3 17th and then visibly relieved as he holed his four-foot par putt at the last to secure the trophy.

“Winning a golf tournament is not easy, and Eddie did not make that easy for me either”, said a teary-eyed Crocker.

“After the three-putt par on the 15th I kind of thought I still had a little bit of room but they’re not easy holes coming down that stretch.”

“It was a great par save on the 17th, and then I thought I could make it pretty easy – it’s a par five coming in – but I don’t think it’s ever easy to make a par to win a golf tournament. That was pretty special.”

Three-time DP World Tour winner Adrian Otaegui, who was sidelined from LIV Golf to make way for new signings, may have been out to prove a point last week. The Spaniard fired rounds of 64, 67, 70 and 68 to share third place alongside David Law on 19-under.

Dimi Papadatos was the lone Australian to make it through to the weekend finishing in a share of 41st place.