Crowe accounted for Jye Halls, 6&4 to claim his third amateur title in four starts after winning the Australian Master of the Amateurs and Victorian Amateur earlier in the month, whilst Hammett won 2-up over Shyla Singh. 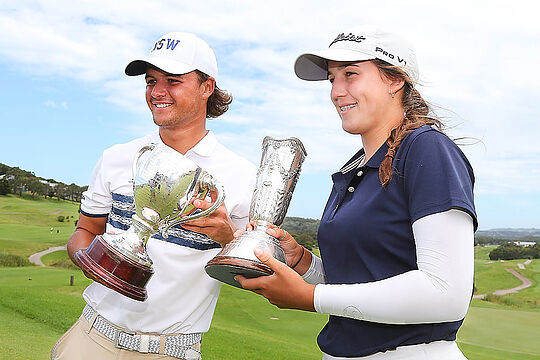 Enroute to the final, Crowe defeated Abel Eduard on the 19th in the round of 32, before taking down Josh Greer, the top seed and NSW Medallist, and Chris Somerfield, 5&4 on both occasions to set up a semi-final showdown with fellow NSW High Performance player Jye Pickin, which Crowe won 4&3.

Hammett shared medallist honours with Caitlin Peirce finishing the two round stroke qualification at 5-under and on her way to the final accounted for Alexandra Phanuruk, Lucie Quilliam and Keeley Marx.

Friday’s victory was Hammett’s fourth in the past eight months having won the Katherine Kirk Classic, Greg Norman Junior Masters and South Australian Masters. The week before the NSW Amateur she secured a top-10 result at the Avondale Medal.