Sydney’s Harrison Crowe pulled off an impressive final day back nine to take out the Asia-Pacific Amateur Championship with a one-shot victory at Amata Spring Country Club in Thailand.

Crowe becomes the third Australian to win the title, joining Antonio Murdaca (2014) and Curtis Luck (2016), and in the process gains exemptions into next year’s The Masters and The Open Championship.

“It feels amazing right now,” said Crowe. “I came out here this week with something to prove and I’m extremely proud of myself for how I hung in there today.”

“When I wake up in the morning, it’s going to be pretty surreal knowing I’ll be playing in The Masters and The Open.”

It was a nail-biting finish to the event which ultimately turned on the par 3, 17th island green at the Amata Spring Country Club.

China’s Bo Jin was carrying a one shot lead with two to play and pulled out the unthinkable shot into the 120 metre hole, short and well left into the water. Crowe then played his tee shot safely to 18 metres from the pin.

A double bogey for Jin and a par for Crowe gave the Australian a one shot lead heading up the last. When both made par on the 424 metre 18th it was over.

Crowe shot a closing 72 to finish at 13-under for the week. He went out in three over par for a 39, yet stormed home in 33, including four birdies in five holes from the 11th. 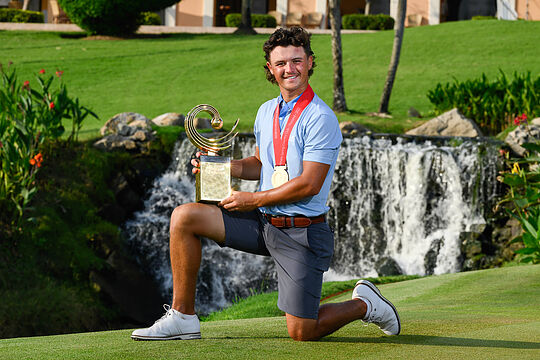 Another Sydneysider, Jeffrey Guan, also produced a special Sunday with the two-time Australian Junior Amateur shooting a three-under par round of 69 to end the tournament in a tie for third. Over the past few weeks, Guan has also finished outright 4th and tied for 9th at the WA Open and WA PGA Championships respectively.

Karl Vilips was the next best of the Australians in a share of 11th at seven-under par with a final round 71. Fellow Western Australians Connor McKinney, Joshua Greer and Hayden Hopewell all ended their week with over-par rounds.

The next edition of the Asia-Pacific Amateur Championship will be played at Royal Melbourne Golf Club from 26-29 October, 2023.