Harrison Crowe has taken out the Victorian Amateur with a 6&5 victory over Western Australian Joshua Greer at the Metropolitan Golf Club.

Crowe played stellar golf during the opening 18 of the 36 hole final making the turn with a handy 3-up lead. Afternoon conditions presented a stern challenge as both players battled the elements and the physical strain of the final. 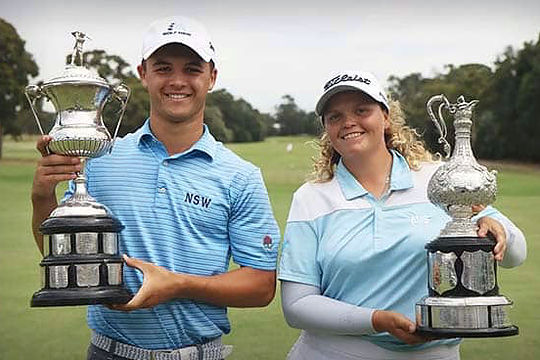 On the 31st hole, Crowe hit his approach to birdie distance of the pin and capitalised on the putt to secure the championship.

“This morning, Josh and I really ground each other out and drained ourselves for this afternoon,” said Crowe. “Then the wind switched, and it was a lot harder to score. It became a lot more par golf. It was super tough.”

“It’s a great finish to the year. It (2020) has been pretty ordinary but it’s something to build on in the future.”

Crowe, 19, accounted for Metropolitan’s Ted Donoghue 1 up in the semi-finals with. Greer needing 21 holes against Christopher Fan from NSW to gain his final spot.

In the Women’s final, Perth’s Kirsten Rudgeley beat Jeneath Wong 3&2 to back up her win in the Port Phillip Open Amateur, which serves as the qualifying for the Victorian Amateur, last weekend.

Rudgeley, who is the reigning WA Amateur champion, took down Kelsey Bennett of NSW in the semi-final, 2&1, to reach the final, whilst Wong defeated another Victorian, Stephanie Bunque, 3&1, in their semi-final.

Rudgeley, 19, made a solid par at the long par-four 15th hole to clinch her win over 16-year-old Wong, the Malaysian native who has won the past three club championships at Metropolitan.

She is the first player since Stephanie Bunque in 2017 to win the Port Phillip and the Victorian Amateur in the same year.