Crowe, Wong in front at Master of the Amateurs

Jeneath Wong and Harrison Crowe have taken the lead following the second round of the Australian Master of the Amateurs at Victoria Golf Club in Melbourne.

Wong fired back to back rounds of 70 to enjoy an eight shot lead over Belinda Ji who sits at 4-over par following rounds of 75 and 73. 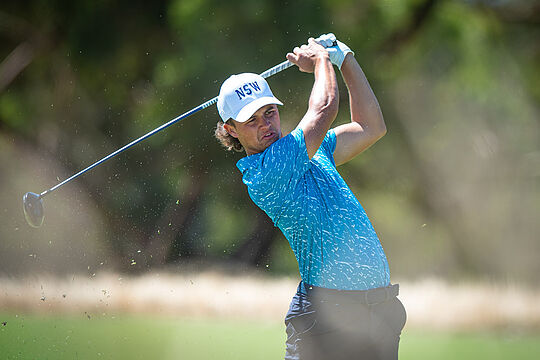 “I was off to good start on the opening nine to be even par after the first nine in that wind, I was very pleased with that,” said Wong, who plays out of Metropolitan Golf Club in Melbourne.

“The afternoon was hard with the wind and I managed to shoot two under in those difficult conditions, so I’m very pleased with the way I was able to keep it going out there today and tomorrow I’m just going to go for the greens.”

Crowe opened with an impressive 4-under 68 and followed with a solid two under par 70 to be at 6 under par and two in front of Andre Lautee, who carded the day’s low round, 4 under 68 to sit two strokes behind Crowe.

“It was brutal out there and with a lot of traffic on the greens later in the arvo, it was tough,” said Crowe.

“I struggled a bit on my second nine. I was two over through five holes but managed to get it back. It was a tough day out there so I’m glad to be in with a 2-under.”

Lautee’s 4-under-par round was impressive given the conditions later in the day punished the majority of the field. Despite the obstacles, Lautee was able to claw his way up ten spots to put himself within striking distance of Crowe.

Only six players broke par during the second round, including defending champion Lukas Michel, who carded a 70 after opening with a 73 and home club favourite Konrad Ciupek, who fired a 1-under 71.

No player has secured a wire-to-wire win here and Crowe is currently well placed to achieve that milestone. The issue is local knowledge on sandbelt courses proves invaluable and the way both Michel, Lautee and Ciupek all put on a stellar display of precision golf, they certainly will present stern opponents for Crowe over the next two rounds.