Defending champion Nick Cullen is starting to see the positives after a year where not much has gone right, ahead of his title defence at the Isuzu Queensland Open at Brookwater Golf and Country Club starting Thursday.

The South Australian won by five shots from Peter O’Malley last year after the pair staged a dog fight during the final round before Cullen drew clear over the final holes. 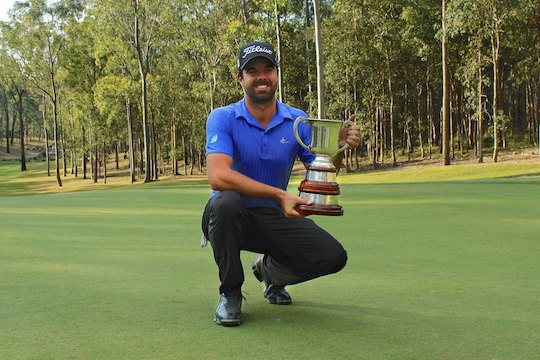 Cullen had hoped to dovetail that success into a strong showing over the summer at home. He was on track to achieve his objectives after a fourth place at the Talisker Masters at Royal Melbourne but things started to go awry from there.

“There haven’t been a lot of events in Asia so I’ve spent a fair bit of time practicing in the good weather in the US getting ready for a pretty hectic finish to the year.”

Cullen finished just inside the top 30 in the recent Fiji International but said he played much better than the result indicated.

“Take out one hole at Fiji and it was a really good week. To be one off the lead after two and a half rounds, it was the first time all year I’ve been in contention and played well. I knew I had to play well on Saturday and was three-under through the front nine and played pretty much flawless golf.”

“It’s coming back at the right time and I’m starting to feel really good over the ball. I’ve had a lot of issues this year off the tee this year and I’ve got my head around that and fixed that. The swing feels great.”

Cullen’s challengers at Brookwater will be thick on the ground, including O’Malley, former NZ Open champion Jake Higginbottom and New Zealander Ryan Fox, who were both placed in the top five last year.

Also in the field is inaugural Fiji International champion Steven Jeffress who stunned everyone with his superb golf two weeks ago and last week’s Gold Coast Invitational winner Rhein Gibson, who played in the company of Tiger Woods and Jordan Spieth during the third round at The Open Championship last month.

Andrew Dodt, Cameron Smith, Michael Wright on his home course and Michael Sim, who also showed glimpses of his best in Fiji, are others who are in-form and likely to mount a threat.

“Brookwater is a little bit softer than last year after some recent rain, but the course is looking great and is still very challenging.” Cullen added. “To defend the title would be brilliant. It would take a little bit of pressure off and turn a bad year into a good year.”

The Brookwater Golf and Country Club, designed by new grandfather Greg Norman, will again provide a wonderful test for the 120 competitors competing for the purse of $110,000 and Official World Golf Ranking points from 28th – 31st August.