Nick Cullen carded a final-round 3-under-par 69 at Metropolitan Golf Club on Sunday to win the Australian Masters title with a 9-under-par total and don the famous Masters gold jacket.

Adam Scott, who was attempting to capture a third successive Australian Masters title, fell agonisingly short and was forced to settle for a three-way share of second place after shooting a 4-under-par 68. 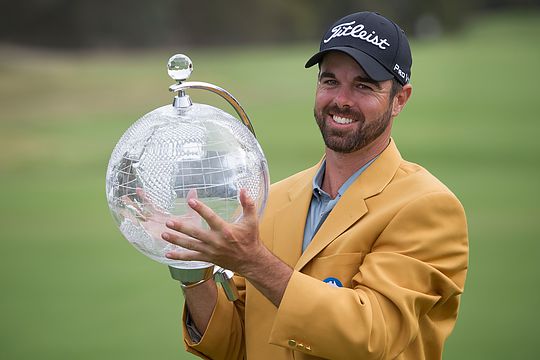 Scott had three birdies on the back nine while another birdie putt that could have brought him level with Cullen on the 18th lipped out.

Newcastle’s James Nitties and Victorian Josh Younger were tied with Scott for second.

Cullen’s lead looked in danger on the final hole after a wayward approach, but a brilliant bunker shot to within a foot of the hole helped him save par and win his biggest pay cheque so far in his career of $180,000.

“It was a relief when I saw it roll towards the hole and I saw it stop only a foot away,” said Cullen about his recovery shot on the last hole which set up his win.

It was Cullen’s third professional title and made amends for missing his Web.Com tour card a few weeks back, which had the Atlanta-based South Australian without a tour to play in 2015.

Ranked 539th in the world, Cullen’s previous biggest win was the 2012 Indonesian Open on the OneAsia Tour while he won the Queensland Open in 2013.

“I guess I just made some bad decisions and it just sort of compounded and I really struggled,” said Cullen about his narrow miss on the Web.com Tour and his game in general this past season.

Yet to the victor at the Australian Masters go the spoils.

“Before this week I didn’t have any status locked up on any Tour, so to have a win and make a little bit of money is fantastic,” said Cullen who now has status on the PGA Tour of Australasia for the remainder of 2014 and the following five years.

Rounding out the top-5 on the leaderboard on 7-under 281 were Matthew Griffin, Aron Price, Adam Bland and Paul Spargo.

The round of the day belonged to Rhein Gibson, who shot a course record equalling round of 7-under 65 to finish tied 9th with Robert Allenby on 6-under 282.