Starting the round with a three-shot lead, Luck began nervously but regained his composure around the Western Australian Golf Club layout to shoot a two-under 68 to win by two over fellow amateur Travis Smyth. 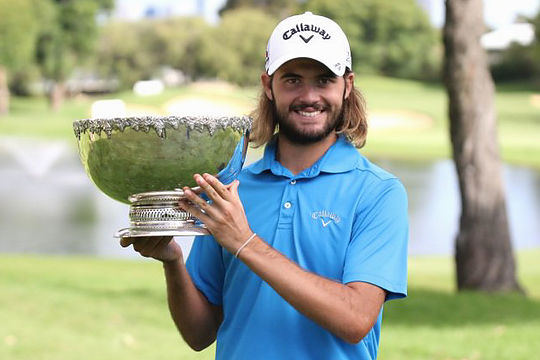 “I had a bit of an up and down start, I made a couple of birdies and a couple of bogeys, but that is pretty standard for me,” the 19-year old Cottesloe member said.

“I had kind of collected my coolness by the 5th, I hit a good shot in there and made a birdie. I just kept the foot lightly on the accelerator and it paid off.”

“It means the world to me to win my State Open and as an amateur it’s even better. To get on top of a Professional field as an amateur, this would definitely be my best win.”

This win is redemption for Luck who finished runner-up at the WA Open last year after giving up his lead on the back nine.

“Obviously last year I was really happy with the result but heartbroken at the same time with the way I finished. To go one better this year and collect the title is an amazing feeling,” he added.

Luck will have his named inscribed on an honour roll of champions that includes names such as Gary Player, Greg Norman, Kel Nagle, Graham Marsh and Ian Baker-Finch and becomes the third amateur in 25 years to win the title, with his predecessors Stephen Leaney (1991) and Oliver Goss (2012) serving as inspiration for him.

“I was thinking about Stephen Leaney last night and if I can follow it up with a second at the US Open in the next few years, I would be pretty happy. Hopefully I have some cool things in store for me.”

South Australian rookie professional Antonio Murdaca battled it out in the final group with Luck and finished the leading Professional on 16-under 264, claiming the first place prize cheque of AU$15,000 for his troubles.

Murdaca’s performance helped solidify his chances of securing his playing rights for next year having failed to earn a Tour card at Qualifying School at the start of the year.

Also playing in the final group, Rick Kulacz overcame a horror start to fire a 3-under 67 to finish the tournament in outright 4th place at 15-under 265, a shot clear of WA’s Jarryd Felton in fifth place.

The PGA Tour of Australasia will remain in the west for the TX Civil & Logistics WA PGA Championship at the Kalgoorlie Golf Club from the 12th – 15th May 2016.