Curtis Luck, the 2016 US Amateur champion, has moved closer to joining fellow Aussies Lucas Herbert and Brett Drewitt on the PGA Tour following a solid top-20 finish on Sunday at the Nationwide Children’s Hospital Championship on the Korn Ferry Tour.

Luck fired a closing round of 66 to move up fourteen places to finish in a share of 16th position, five strokes behind eventual winner Canada’s Adam Svensson, and in the process move to 24th on the Korn Ferry standings. 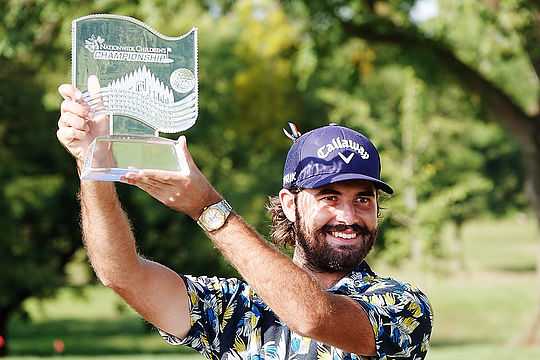 Luck failed to defend his 2020 title but is on his way to a PGA Tour card after moving into the Korn Ferry Tour top-25 (Credit: PGA Tour)

Luck was the defending champion at the event and with the first 25 PGA Tour cards already determined via the regular tour season points list, his sights are firmly set to make the most of the finals series where there are a further 25 PGA Tour cards awarded through the three-event finals points list.

The Finals Points List is made up of players Nos. 26-75 on the Korn Ferry Tour Points List and Nos. 126-200 on the FedExCup, as well as non-members and medical extensions.

With one event remaining, the Korn Ferry Tour Championship starting this Thursday, Luck needs to remain inside the top-25 to earn playing rights on the main tour. In 2018, Luck secured his PGA Tour card with an 18th placed finished on the season regular Korn Ferry Tour money list.

Luck, 25, turned professional in 2017 following a stellar amateur career where in March 2017 he became the top-ranked amateur in the world. During 2019 he played the PGA Tour season in 23 events making the cut in 10, with his best result a share of 5th at the Zurich Classic of New Orleans before finishing 175th in the FedExCup rankings.

Brett Drewitt and Aaron Baddeley were the next best Australians this week in a share of 22nd position. Rhein Gibson finished in a share of 34th with Lucas Herbert tied for 58th.