D.A. Points won the Houston Open by one stroke for his second career PGA Tour title, a victory that earns him a start at this month’s Masters Tournament.

Points shot a 6-under-par, 66, in the final round at Redstone Country Club in Humble, Texas, making a 13-foot clutch par putt with a borrowed putter on the closing hole to secure the win. 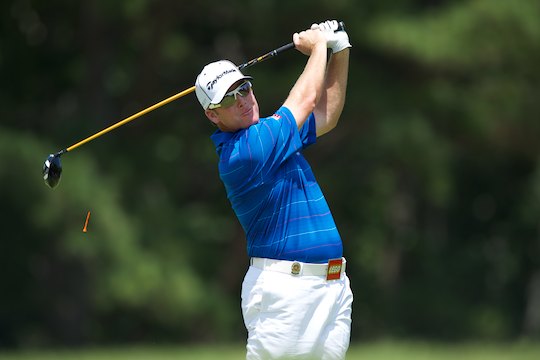 Starting the final round one shot behind leaders Stewart Cink and Bill Haas, Points kept his composure following a three hour weather interruption, after Hass and Cink fell off the pace shooting 3-under and even par, respectively.

“To have a putt to win, you want that starting out every week,” said Points, who has endured a difficult season that included missing seven of nine cuts and finishing no better than 63rd in the other two starts.

Points, 36, finished at 16-under, one shot better than Sweden’s Henrik Stenson and fellow American Billy Horschel to collect the US$1.1 million prize, bringing his career earnings on the PGA Tour to US$7.9 million

“I’ve been having a really tough year,” said Points, who was wearing his ‘special good luck’ Lego Belt, the same one he wore at his first tour win at Pebble Beach.

“I never count myself out. I never just chalk it up like, ‘Oh, this year is over with.’”

“I’ve never felt like that. I was just grinding, just trying to wait and try to find that one thing that like, ‘Boom! There it is.’ And there I go.”

“Fortunately, it was this week and I capitalised on it.”

The win gives Points another two-year exemption on the PGA Tour. His exemption from the Pebble Beach would have expired this year.

Dustin Johnson and Ben Crane tied for fourth at 14-under par, while world No. 2 Rory McIlroy tied for 45th place, ten shots behind Points.

McIlroy had a chance to remove Tiger Woods, who did not compete in Texas, atop the world rankings with a win but rounds of 73-70-71-70 damaged his chances.

Aaron Baddeley finished the best of the Australians in a tie for 31st position at 6-under, a stroke ahead of Matt Jones at 38th.

Steven Bowditch and Cameron Percy rounded out the Aussies making the weekend, finishing in a tie for 56th and 70th respectively.

A shocking second round 79 left Ogilvy missing the weekend seeing the 2006 US Open Champion slipping outside the word’s top-50 and missing a spot in the Masters for the first time in eight years.

John Senden and Greg Chalmers also had their chance to play at Augusta had they secured solid results in Texas yet both missed the cut.