In an exciting day’s play the experienced NSW senior Denis Dale has finished as the winner of the 2012 South Australian Senior Amateur Championship played at the Barmera Golf Club on the Murray River.

Trailing overnight leader, John Beaumont, by a stroke, Dale fell further behind with Beaumont playing beautiful golf to be one under par after eight holes. 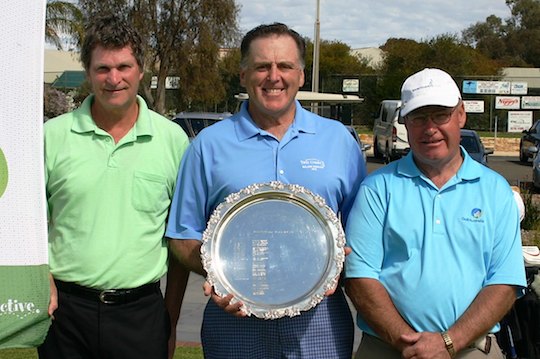 When Beaumont then struck trouble at the 9th and Dale birdied the 10th, it was a one stroke margin to Dale.

Victorian Alan Bullas was also playing very well in the final group and was just a couple behind.

The margin stayed the same for most of the back nine with some good golf played by all three as a strong wind came up for the final holes.

When the group reached the 485 metre par 5 eighteenth all three still had a chance to win – Dale leading Beaumont by one and Bullas by two.

Dale putted first and struck his long eagle putt to within a metre and watched anxiously as Beaumont putted for his eagle – it came up well short and he still faced a tricky birdie putt.

Bullas then lined up his eagle putt and the crowed groaned as it stopped one roll short and dead on line.

Beaumont’s birdie putt then looked perfect but “horseshoed” out leaving Dale to stroke home the birdie putt with the knowledge he now had two putts to win.

It was a great three days of golf on a beautifully presented regional golf course.