John Daly has been invited to be a part of the TV commentary team reporting on November’s Presidents Cup at Royal Melbourne.

The double Major winning Daly confirmed to Golf Grinder he is competing in events either side of the Presidents Cup, namely the Australian Open in Sydney and the Australian PGA in Melbourne. 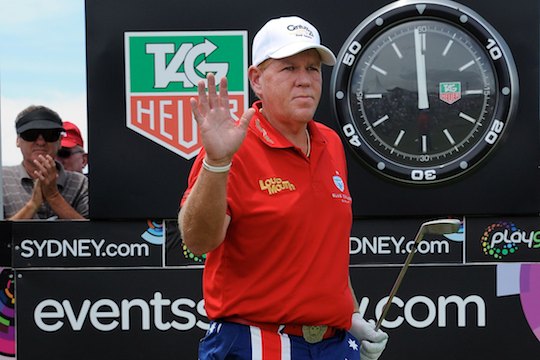 Daly’s believed to have been approached by either Channel 9 or co-hosts Fox, to provide his views on the showdown between the Internationals and the Americans.

“It’s something that I’ve never really undertaken, so it’s going to be fun to be involved with the Presidents Cup,” he said.

“I’ve been approached by Australian TV and it should work out well as I am not playing golf that week.”

And after having travelled to Australia many times, Daly is hoping to firstly find success in the Australian Open at The Lakes.

Daly would then dearly love to play well in the Australian PGA, and on a Coolum course that has been yet to be kind to the still popular American.

“I love playing the Australian Open but I just wish I could play that course at Coolum,” he said.

“I don’t mind the hot weather but I’ve never played good in the Australian PGA. As for the Australian Open, I felt as though I hit it better last year.

“Also there’s a great field heading to the Australian Open as I guess Freddie (Couples) wants as many players as possible to be in Australian getting acclimatised.

“So I want to be a part of that field and hopefully get my hands on the trophy.”